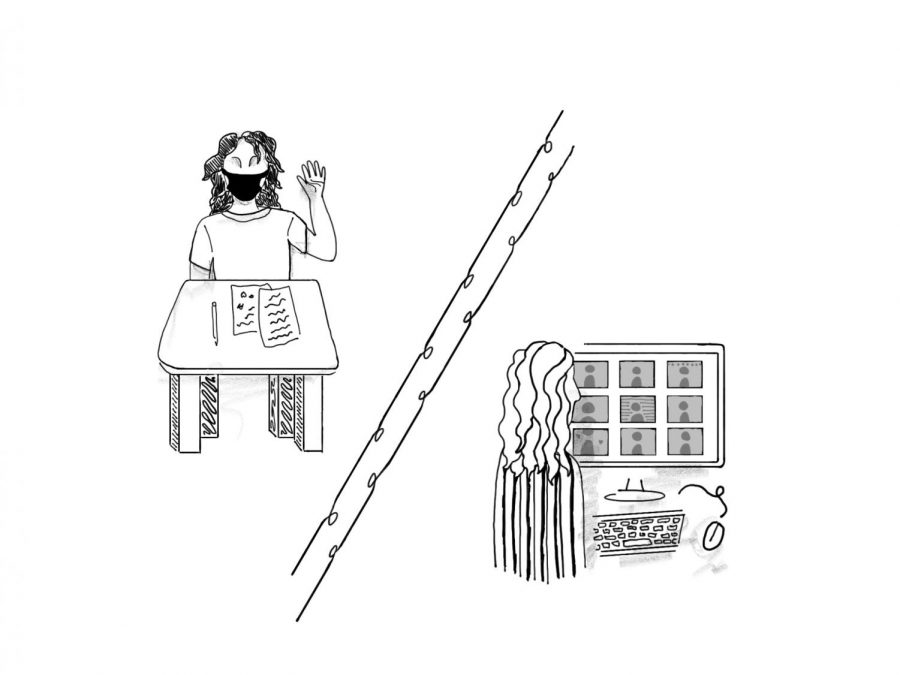 When school “started” online in September, it had been over six months since our last day of in-person school. Six months since I’d hugged my friends, seen my classmates, talked to my teachers face to face, and experienced a normal school day. That’s six months of sitting and looking at a screen for the majority of the day. Six months of no intimate social interactions, and I felt myself falling deeper into despondency. I needed to go back to school.

To say starting my junior year of high school online was hard is an understatement. This was supposed to be the year where I pull myself together and get ready to apply to colleges next year. But, on the first day, already everything felt so disconnected. Instead of sharing a space with my peers and teachers where we could have productive conversations, I was forced to spend the whole day looking at pixelated faces in boxes.

I just felt drained, and I know I’m not the only person who felt that way.  NPR reported that A Center for Disease Control and Prevention survey in June found an increase in anxiety and depression in adults, as well, and an alarming uptick in suicide rates for teenagers and young adults. Another study of students in China’s Hubei province found that 22.6 percent reported symptoms of depression and 18.9 percent reported symptoms of anxiety, just after about a month of remote learning in lockdown.  In addition to the feelings of isolation and loneliness, many children have had to worry about their parents’ unemployment, high-risk family members and food insecurity, on top of online school.

When I received the news that day students would be going back to school at the beginning of October, I was happier than I had been in a long time, although I knew it wouldn’t be like it had been, without the boarders. But, it was the best we could get. Both of my parents had been serving on Masters’ health advisory committee, and were pushing for students to return safely to campus. They knew that as the weather became colder, a second surge was imminent, and going back in October would probably be our only chance to go back in-person before the numbers started climbing again.

When I walked into the classroom on Monday morning, Oct. 5, and I saw friend’s faces that I hadn’t seen since March, wearing a mask all day didn’t seem so bad. It was worth it to be with everyone again.

Let me set the record straight: I would only encourage coming back to school in-person if I was sure my community would be safe. This pandemic has not only shown us that anything can happen in the blink of an eye, but also that taking the precautionary measures necessary to ensure people’s safety works. I’m not one to throw around absolutes, but I do believe that all the students and faculty at Masters are capable of following directions put in place for our collective well-being. These safety measures include wearing masks and social distancing at all times, staying home if you feel ill, and opting for remote learning if you may be at a higher risk of infection.

The criteria for reopening schools is based largely on state guidelines from the CDC which set standards for local infection rates and the number of active cases. New York state was hit hard in March and April, and residents were confined to their homes for upwards of three months. In the beginning of October, our statewide infection rate had fallen below one percent and remained steady for over a month. These were the ideal conditions for reopening Masters.

I am immensely grateful for the essential workers who have put their lives on the line for the health and safety of others. I’m grateful for all the people who stayed in their homes, wore masks when going out, and followed the directions to help curb the Covid-19 numbers. I’m also extremely grateful to the faculty and administration at Masters for working non-stop through the summer to find a way to get us back on campus as soon as possible. The plain truth is, people in New York followed the rules, and now it’s paying off. For the sake of our sanity, we should return to school and work safely, but we can’t do that unless everyone follows the rules.

I’m imploring everybody to be safe and just follow the simple guidelines. I have no doubt that people all over the world just want to be able to go out again, hug their friends, and see their grandparents. We weren’t made to stay inside all day and stare at screens. After this, I hope no one takes being alive for granted. We’ve lost so much, and can’t afford to lose anything more. So, please, be safe and smart, so we can all stay in school and overcome this pandemic together.