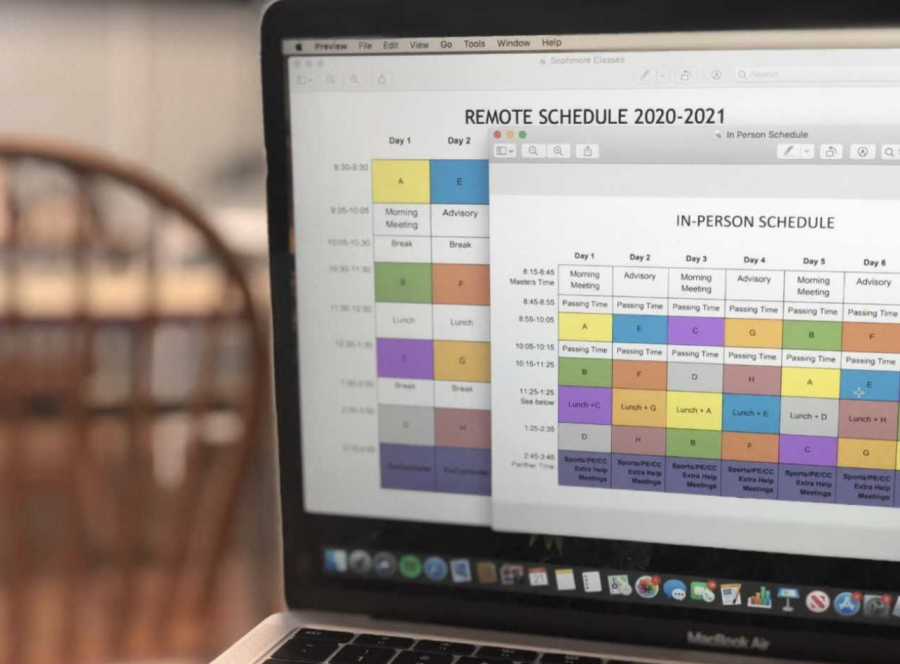 After four months of learning from home, Masters students, faculty and staff made their way back to campus for in-person learning. As the school tries to accommodate both on-campus and virtual students, the remote schedule which has been used since April has been replaced by a new in-person schedule.

There are a number of standout differences between the old and new schedule. Breaks between classes are shorter, classes were extended from 60 to 70 minutes, the day now begins and ends 15 minutes earlier and a 50-minute long lunch replaces the hour-long break of the virtual schedule, as it is now combined with alternating shift 3rd period classes.

For Junior Teddy Diamond, the lack of breaks and designated club meeting time during the school day was a concern. Diamond is a co-president of two newly-founded clubs, Quantum Everything and the Card Club, and the new schedule left him struggling to plan meeting times which work for club members.

“Seeing that there were no breaks, the first thing that popped into my mind was there won’t be enough club time. I created the Quantum Everything club this past year and now I need to completely rethink how it’s going to work,” Diamond said, “It’s been a challenge. We still haven’t found a suitable time for either the Quantum or Card club.”

Sophomore Jaden Bascon says this change is more helpful to her, starting out as a remote student, then returning to campus.

““I prefer our new schedule because we end school earlier giving us more time after school for homework, sports, etc.; however, the 70 minute class periods make it slightly harder to stay focused the entire time. I am also not sure if advisory everyday is needed. Other than that, I wouldn’t change anything about the new schedule.”

Associate Head of Upper School Sara Thorn helped to create the new schedule alongside Head of School Laura Danforth and a team of other administrators.

Thorn said, “All schedules are compromises, and this one felt like we were able to serve the people in the best way. There’s always going to be something that we could have done differently, but I think it’s a good compromise. There will always be somebody who’s not entirely happy with it, but we’re just trying to do what’s best for everyone.”