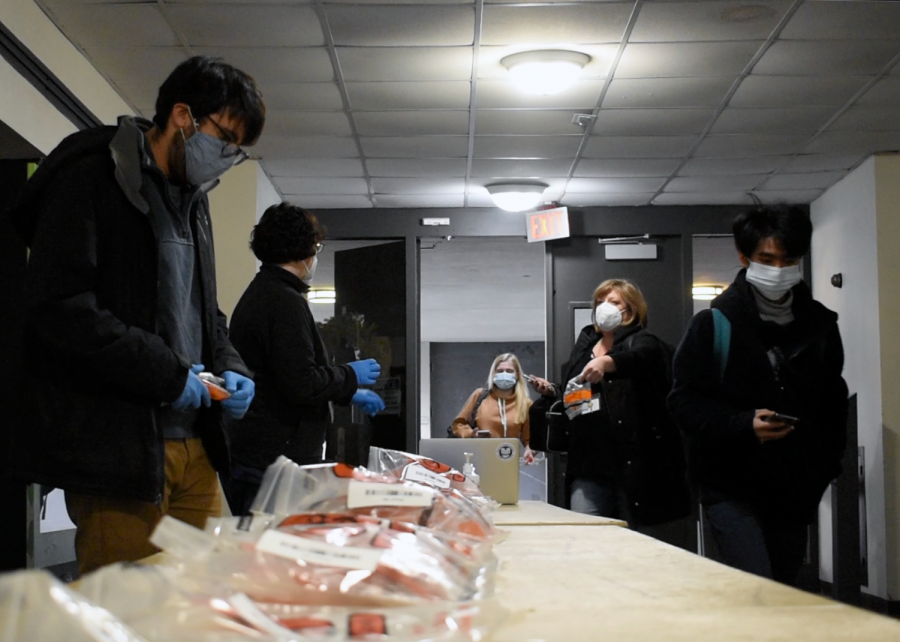 Students and faculty wait to turn in their test kits on Tuesday, Dec. Every week, students perform a RT-PCR COVID-19 test at home, before handing the kit in when they arrive at school. The tests are then packaged by pool and sent to CIAN Diagnostics, a lab in Fredrick, Maryland. Results are typically shared within 48-72 hours of collection.

Once a week, in-person junior Ellanna Swope darts to her kitchen cabinet early in the morning to get her unused COVID-19 at-home testing kit. Swope collects her samples and puts them back into the kit’s test tube as she runs out the door to begin the drive from New Jersey to campus. Arriving on campus, her kit, along with the kits of every in-person student and faculty member, is scanned by QR code and sort into its respective pool. She can now start her day while her sample is sent off to be tested.

According to the Centers for Disease Control and Prevention (CDC) pooled testing lets laboratories test more people with less materials by combining the samples from several people at a time. Pooled testing has also been known as a cheaper and fast- er alternative to individually testing everyone in a large group of people.

At Masters, many credit pooled testing as an important reason campus is able to open.

Swope said, “Knowing that I’m not around people who have tested positive is a lot better than not knowing and living in fear. But I still come to school with two masks on everyday.”

Swope also mentioned how she thinks pooled testing should be implemented in more schools as part of COVID-19 safety initiatives and why it’s important for the Masters community. She said, “Pooled testing won’t solve the problem, but it does help limit the spread within a community, because if someone tests positive, they are immediately sent home.”

Member of the Masters Health Advisory Team and Masters parent of two Upper School students, Dr. Rini Ratan said, “Pooled testing has contributed significantly in keeping Masters open. It allows us to know at any given time that the rate of positivity amongst our small cohort isn’t increasing at the same rate that we’re seeing in New York City, or elsewhere in the country.”

The Health Advisory Team is made up of not only medical professionals such as Ratan, but also people working with legal counsel and members from the school, like Director of Health Services Sue Adams. This committee has played a crucial role in bringing pooled testing to Masters.

“Pooled testing has allowed Ms. Danforth, the facility, the students and the parents to continue to have daily operations be in person with the knowledge that we are not taking unnecessary risks,” Ratan said.

But with pooled testing successes, there are also limitations. According to the CDC, with a larger number of people in a pool, the likelihood of pooled testing results coming back with false-negatives increases. Additionally, making each individual personally responsible for providing weekly samples increases the likelihood that the tests are performed incorrectly.

According to the CDC, “Specimen integrity can be affected by the quality of swab specimen collection, which could result in some swabs having limited amounts of viral genetic material for detection.” For some, this raises concern and doubt over the reliability of the pooled tests.

Sophomore Ella Dundas, a remote student, is skeptical of the pooled testing accuracy, fearing students won’t be collecting an adequate amount of samples each week.

She said, “If I were in person, I would feel safer because a little is better than nothing. There is always a chance of [the lab] getting false results, but I think the bigger issue is students not taking the test correctly.”

Mary Anne Schmitt-Carey, president of C-19 Safety First, an organization dedicated to connecting schools and businesses to pooled testing for safety, started to get into the pooled testing business with aspirations of helping her daughter, a high school
junior, and other students to have a safer school year as the pandemic continues.

Schmitt-Carey said, “This is a perfect moment in time for public policy to promote and insist that testing moves in this [the pooled testing] direction, because a lower cost and more reliable test that you can take weekly is going to be much more powerful than randomly collecting samples.”

While pooled testing is not fully reliable, as COVID-19 cases rise more schools and businesses are implementing a pooled testing system as a weekly routine. Schools around Masters such as Rye Country Day, The Hackley School, Sacred Heart are among those that utilize pooled testing for in-person members.