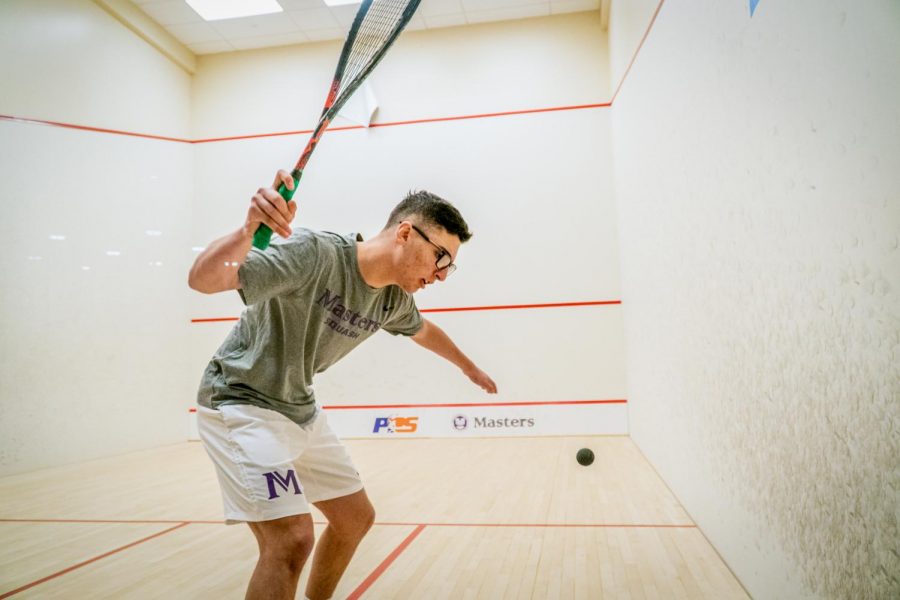 Being the top-ranked squash player for his age and getting accepted to his dream school, Taha Dinana, a freshman squash player at the University of Virginia (UVA), and a Masters alum, has been training in his hometown of Cairo, Egypt, preparing for his first college squash season.

At the age of seven, Dinana picked up his first squash racket, and his father knew that there was something special about squash in him. At the age of 15, he proved himself to be a worthy recruit for Masters, after winning six of eight tournaments he played in eighth grade. At the age of 17, he moved rapidly up the national rankings and reached the coveted number one spot for under-17 (U17) boys.

During his four year career at Masters, Dinana only lost two matches. His impressive record and victories in tournaments drew many Division I colleges to send offers his way, including George Washington University, Cornell University, Harvard University, Princeton University, as well as UVA, among others.

Dinana said his approach when choosing his colleges was to balance academics and the squash program. “The top priority for me is academics, it comes in number one because even though squash plays a huge part in my life, the academics and the degrees are what will help me in the next chapter,” he said.

Dinana didn’t take any of the offers from the Ivy League schools partly because of the constant academic pressure he foresaw in those environments; he preferred the University of Virginia’s curriculum which was similar to the Ivy League universities but with less pressure. At UVA, he is majoring in Economics and Business Analytics.

In addition to the school’s appealing academics, the University of Virginia already was home to two of Dinana’s hometown friends, Aly Hussein and Omar El Torkey, with whom he currently trains.

Although the university’s dorms are open, Dinana has chosen to stay in Egypt for more intense training, in preparation for his first season in January. Every day, he trains for 10 hours then attends his classes virtually at night. “It sucks, I had no social life,” he joked.

According to Dinana, training in the United States is very different from doing so in Egypt. Being one of the most popular sports in Egypt, the country has dominated in international competitions. Many of the top players at all levels hail from Egypt, including his two teammates at UVA. By staying in Egypt, Dinana is able to train and compete with some of the best players in the world before flying back to the United States in January.

Many of UVA’s typical opponents, including Brown University, Harvard University, Princeton University, and others have all dropped out of this season due to the COVID-19 pandemic. “It should be a lot easier [this year in the National College Athletic Association (NCAA) tournaments,]” Dinana said.

From being ranked nineteenth nationally two years ago to ranking seventh last year with the addition of Hussein and El Torkey, the team is looking to reach even greater heights this season.

“I think we’re able to go into the top five this year,” Dinana said.

To stay connected with the team while players are scattered around the globe, Dinana and his team have weekly Zoom meetings to check on each other’s well beings and fitness.

While going pro is an option, he said that it is a make or break path to compete with the professionals. His next goal is to get into business school and see where chapter that chapter leads him. As for squash, Dinana said: “it all depends on the last two years of college because I’ll start playing pro tournaments, and if I do well, I may consider going pro.”