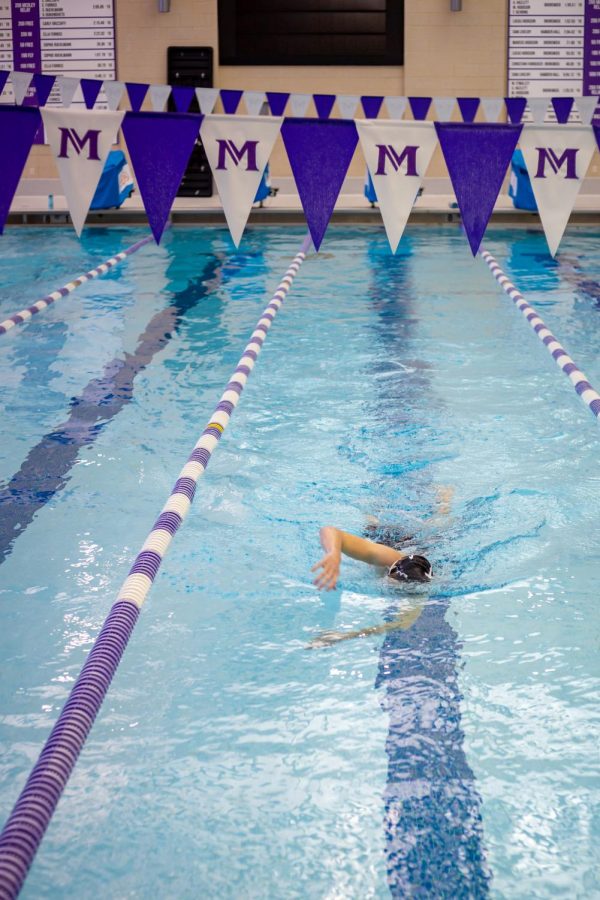 A Masters student swims alone in one lane during an afternoon practice.

As the winter athletic season neared, swimmers all over the country were forced to adapt to a restriction unlike any other sport: staying safe without the possibility of masks. Although approached differently, coaches found that there are in fact ways to keep athletes both safe and enthusiastic for the season ahead.

At The Master’s School, the swim team had previously trained with all of the swimmers in the pool at once, separated into the six lanes based on skill. However, as COVID-19 cases continued to rise across the country, practice regiments changed so that swimmers could stay safe.

Swimming in lanes occurs in a circular fashion, with one swimmer positioned on the right side of the lanes swimming in one direction, and the other side of the lane when swimming in the opposite direction. Coaches hope that by reducing the number of swimmers in each lane, students starting at opposite ends will only pass each other for less than a second, and should never have direct contact.

As a result, the team has implemented training consisting of two one-hour sessions, with only 12 people in the pool at one time, two in each lane.

Junior Chris Shim was surprised at how much sharing a lane with only one other person impacted practice.

“Swim has always been [about] hanging out with people and being in a lane so it can get kind of crazy but now with one other person or just yourself, you’re alone,” he said.

Although students do not have the ability to change in regular bathrooms due to COVID-19 restrictions, the gendered locker rooms in the Fonseca Center have remained open, with only four people inside at one time so that proper social distancing can continue. Once changed, athletes walk to the pool fully masked. Those that are swimming will continue to their lane, only unmasking when entering the water. For full efficiency, small plastic bags are being handed out to the swimmers so that they can keep their masks dry on the pool deck while they’re swimming.

Sophomore Jaden Bascon has been on the swim team for two years and noted how the training both on land and in the pool has been very effective.

Bascon said, “The two different sessions are organized well because they flip-flop, one session swimming Tuesdays and Thursdays and working out Wednesdays and Fridays, while the other session does the opposite.”

For those students not swimming on a given day, the coaching staff has created dry land workouts that will give students the opportunity to build their strength until they get back in the water. These workouts include exercises such as squats, burpees and planks, among activities.

While high school swim teams are not currently having meets of any kind, the coaches are doing their best to keep athletes engaged and excited to come to practice.

Head Coach Susan Greally said, “This is a new situation for all of us so we are all trying to figure it out together. We are going to focus on skills, having fun with good music, and keeping them [swimmers] motivated.”

Swimming at the College Level

Although these adaptations to the high school swim season are projected to work well, college teams had to adapt to the season quite differently due to the high intensity that college-level athletics require.

For Division III swim teams, practices were shortened to only an hour daily, similar to the Master’s School, meaning that the structure of practice had to be altered radically.

Nick Nichols, the head coach of swim at the University of Massachusetts at Amherst said, “Because our athletes are not having meets, this was really a time for them to focus on technique rather than speed so they can come back stronger and well prepared for next season.”

While Amherst is acclimating to a season without meets, coaches at Tufts University have kept their regular training regiment the same as last year, using this season as an opportunity to raise the intensity of every practice. Additionally, they have chosen to hold virtual meets to measure improvement, due to the lack of in-person meets this season.

Tufts Head Coach of Swim Adam Hoyt said, “If you get the athletes to elevate their effort and reframe the possibility of being great with less time, their focus and attention to detail can heighten, and they will be able to make improvements just as great as if they had regular practices.”

Division I swimming remains mostly unchanged, as the majority of teams have continued with their usual practice hours and in-person meets. In fact, many have even begun practicing regularly with three swimmers in one lane, one starting five feet off of the wall, and the two others at opposite ends of the lane. Duke University was one of the first schools to implement this change and has been able to keep practices exactly as they have been in the past, due to daily COVID-19 testing.

Dan Colella, Head Coach of Duke swimming said, “The people training alongside you and rooting for your every success are like family, so follow the regulations because more than anything, you need to be working hard to keep those around you safe.”