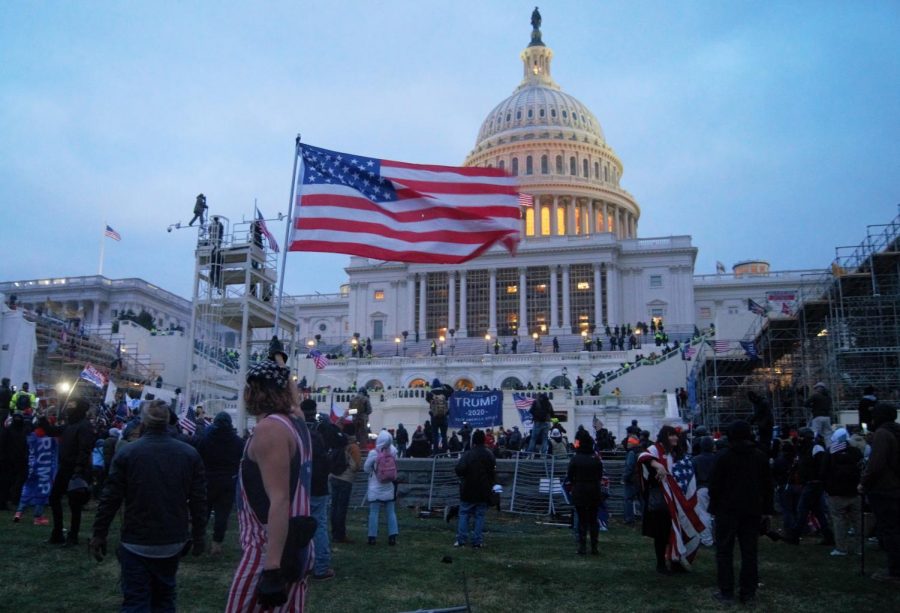 Trump supporters occupy the Capitol grounds during Wednesday's violent attempt to stop the certification of Joe Biden for President. Incited by President Donald Trump, the mob infiltrated the building, vandalizing statues, stealing property and threatening to hang elected officials. Masters' Students and faculty reflect on the insurrection, and the deepening political divide as Trump leaves office.

Members of the Masters community are outraged at the hypocrisy in President Donald Trump’s rhetoric and law enforcement’s response to the deadly insurrection on Capitol Hill Wednesday, when a mob of Trump supporters, some armed, infiltrated the building attempting to stop the counting of electoral votes to certify Joe Biden as the next president of the United States.

Videos surfacing across social media from this week’s events – including a policeman posing for a selfie with a civilian inside the Capitol and other Capitol police backing off barricades after being overwhelmed by angry rioters – are in stark contrast to scenes of protest from early this summer. In June, national guard troops equipped with riot gear lined the steps of the Lincoln Memorial during a Black Lives Matter protest and peaceful protestors demanding justice for George Floyd in Lafayette Square were cleared out with tear gas and pepper spray (below) for the President to stage a photo-op with a bible at St. John’s Church.

Masters’ Director of Equity and Inclusion Karen Brown, a former legislative assistant on Capitol Hill, said she was angered by this variance.

“Knowing that just a few months ago when Black Lives Matter [protests] were occurring, there were numerous national guard and police protecting the Capitol because they were afraid a large group of folks of color were going to be there, and then seeing a total disregard for that same level of security presence with a group of people there that look differently was the quintessential example of a double standard,” she said.

This double standard is not new though, senior Vianny Lara said, adding that incidents of systemic racism in policing occur all the time in America.

“As a person of color, I was not shocked because I’ve seen how people [of color] have been treated in this country both directly and indirectly,” she said.

Moments after the riots erupted, Brown began to worry for the safety of her son.

“I did not want my son walking down the street to Stop & Shop to buy groceries, because I have that fear of the unknown. I thought, ‘What might that person, who’s thinking that they can be a part of what’s going on in D.C., be thinking about doing here in Westchester and in Dobbs Ferry?’” Brown said.

On Wednesday, post-insurrection, the self-proclaimed President of law and order, initially called rioters at the Capitol “very special” people and said he loved them in a video posted to his Twitter account (which is now permanently suspended). In contrast, while protests against racial injustice swept across the nation, Trump called demonstrators “thugs” and had warned that anyone who damaged federal statues and monuments could serve a minimum of 10 years in prison.

Flashback: July 27. Trump called for protesters who damaged federal buildings to get a minimum of 10 years in prison. pic.twitter.com/3F58IR1HHf

Brown said, “No matter how many times you see and hear things that hurt and disappoint, you want to still feel because you realize the fight has to continue. For one of the first times, I didn’t have that feeling of fight. I was actually upset at myself because I was numb.”

Trump, aided by his confidants, spurred on his supporters at a “Save America” rally on Wednesday morning in Washington during which he said, “You’ll never take back our country with weakness. You have to show strength and you have to be strong.” Trump’s personal attorney and former New York Mayor Rudy Giuliani also told the crowd, “Let’s have trial by combat!”

Those who listened included members of the far-right, neo-fascist group Proud Boys and QAnon conspiracy theorists, who believed the election was stolen from them and that Democrats on Capitol Hill are part of a Satanic pedophile ring. One man was photographed waving a Confederate flag inside the Capitol – something that did not even occur during the Civil War – and another was wearing a “Camp Auschwitz” sweatshirt.

Junior Anna Drattell, who is Jewish, explained her reaction to what she witnessed.

“It was horrifying seeing shirts that threatened my very existence,” she said. “I’ve never quite felt safe in my own skin, but seeing this was soul-crushing.”

Members of a New England Neo-Nazi group NSC-131 were also there, according to a report. Nooses and gallows were set up outside to hang Vice President Mike Pence, and some rioters were photographed flashing the “OK” sign, which is considered to be a symbol of white power.

In the aftermath of the riots, foreign leaders were highly critical of the attack on American democracy – Iranian President Hassan Rouhani called Trump a “sick person” for “disgracing the country” and “creating troubles for the world.”

“A lot of people who live in the Western Hemisphere but outside the U.S., including me, have an idealized perception of the U.S. at a young age,” he said. “But since I’ve been going to school here, I’ve been able to learn a lot more about the nation’s history and as a result, my perceptions have begun to change. I wouldn’t say that I just woke up yesterday and my perspective on America turned a full 180. It’s been changing for a long time.”

In response to the riots, the school made arrangements for community members to share their thoughts and emotions in virtual talking circles, affinity groups and counseling sessions. A special schedule was also implemented on Thursday so the day could begin with morning meeting addresses from DEI Director Brown, Head of Upper School Peter Newcomb, and Director of Global and Civic Engagement Dr. Robert Fish.

In class discussions about Wednesday’s events and more broadly on the current political tension, some students called all Trump supporters racist and unkind, and anyone who defended them as “privileged.” Eric Shear, the Upper School coordinator of diversity, equity and inclusion, addressed this language.

“By President Trump getting elected, folks of colors’ lives were hurt. And there’s no gray area with that. I think it’s an okay view for them to have if that’s what they believe in. I would encourage them to be able to explain it, and explain why they think that’s productive, but I don’t think it’s my place to tell them they can’t hold that view,” Shear said.

A Masters student, who requested to remain anonymous out of fear of being ostracized for their views, disagreed.

“Generalizations do more harm than good. You can’t assume someone’s situation that led them to voting for Trump, so saying that the decision is purely black and white is wrong in the sense that it’s much more nuanced than that for each person who voted.”

The student added, “In reality, there’s an abundance of gray areas that many members in our community refuse to acknowledge. Someone may need to vote for Trump in order to put food on the table, for others, they may just feel uncomfortable voting for a Democrat candidate because of their background. We owe it to those who might have an opposing view to at least consider their side, and not immediately shut it down, using insulting labels that aren’t necessarily true. Honestly, that threatens the integrity of the right to free speech in our country.”

Drattell said, “I feel like people [at Masters] say they’re supportive of all views, but only if it’s the right shade of blue, and God forbid it’s a color with a slightly red tint.”

Nevertheless, Bernal believes support for the 2020 Republican candidate serves as a clear indicator of a person’s moral code.

“When you vote, you have to consider what the outcome of your decision can be and how it will affect the entire country. If you’re willing to overlook all these negative things that have come from Trump being in charge, because you earned more money under his presidency, for example, it really calls into question what you value. People’s lives are at stake.”

“I just don’t understand what’s going through their [Trump supporters] minds. When you’re faced with those who don’t really see you as a person or don’t appreciate what you have to offer as an individual, I can’t really separate that from my [impression of them].”

Bernal said, “There’s a lot of emotion right now for students of color around this topic. We’ve tried rational discussions for a long time, and nothing has worked. People are just fed up.”

Political differences aside, Brown believes it’s important for the community to continue engaging in comprehensive discussions about race and viewpoint.

“I don’t think that we can move forward before people understand the racism of the last 400 years in this country where people of color were brought over from Africa and enslaved, and are not allowed equal education or job opportunities,” she said. “People want to talk about equity and inclusion, but if people, systemically, feel this pain day in and day out, how are we supposed to get a break?”

Shear added, “Trump is not a cause, he’s just a symptom of really deep problems and division that exist in this country.” He continued, “Folks of color have been doing this work for so long and they’re really good at it. We need to follow their leadership, but as White folks, we also need to step up and get other White people on board and make sure they’re having these conversations, getting educated, and doing the work in a way that’s meaningful.”

“The big thing is to remember compassion, empathy, kindness and forgiveness,” Lara said. “Growing up in an immigrant family, I’ve been taught that fear gets you nowhere, but change does. And there has to be a change in mindset and in what our children are learning for us to grow from this.”

In her morning meeting address, Brown urged the next generation to take the initiative to amend institutional flaws.

“A lot of what was going on [Wednesday] was about hate. We have to stop it,” she said. “What are you going to do? It is no longer about intent, it is about impact. So, what is your impact going to be?”

This is a developing story. If you have an opinion you would like to share, please reach out to logan.schiciano@mastersny.org