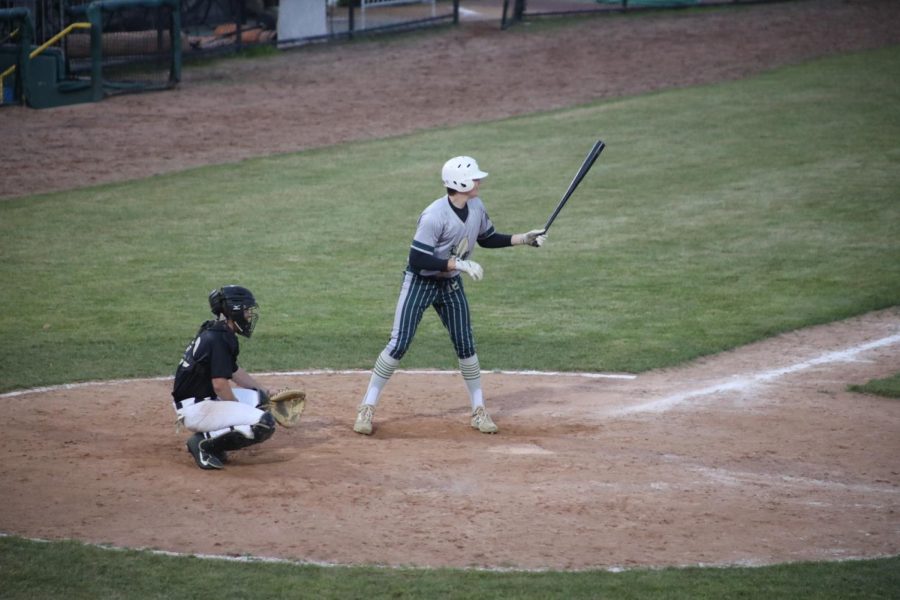 Junior Aidan McLaren steps into the batter’s box during a night game on Oct. 3, 2020. At the time, McLaren was playing for L & M Baseball. Since then, he switched teams and joined East Coast Elite, for whom he currently plays.

As athletes around the country have started to make a safe return to the playing field, there is one group of competitors who have been especially frustrated by the challenging athletic circumstances of the COVID-19 pandemic: National College Athletic Association (NCAA) recruits in the Class of 2021 and 2022.

From strict protocols in the spring and early summer to a near-full return to sports for many in recent months, the last year has been quite the rollercoaster. And as the athletics world nears the end of the extended NCAA dead period, it will mark a return to some sort of normalcy for these highly-talented high school student-athletes.

Although the dead period, normally a time for coaches to watch competitors play in-person and to discuss recruitment with these athletes, was pushed back for the safety of players, families and coaches, many athletes saw this as a missed opportunity for recruitment. And unfortunately for competitors, this decision affects both the Class of 2021 recruits and also the Class of 2022 recruits. However, Masters Athletic Director Logan Condon said he recognized the value of the extension.

“I think the main reason why it was put into play was to keep the playing field level,” Condon said. “Because the reality is, state-to-state, our [COVID-19] protocols are completely different,” he continued.

Specifically, Condon noted how there were big differences between a state like Florida, which only saw light protocols, and New York, where sports protocols have remained much stricter.

Along with the dead period shift for Division I athletes, scheduling of sports practices and games in general for competitors of all skill levels were completely thrown off. Junior Aidan McLaren, an infielder and pitcher for Masters’ varsity baseball team and travel team East Coast Elite, spoke about how his travel team’s schedule has been affected by Covid.

“I’d say about 50 to 60 percent of the good events had to get canceled. We were scheduled to go down [to] Georgia…that was the biggest one that got canceled,” he said.

Though McLaren, a potential Division III baseball recruit, was disheartened at the loss of major events and showcases, he was still able to work on refining his skills during the pandemic.

“This offseason, I’ve probably been working harder than I have any other offseason,” he said. “I’ve been getting to the gym five days a week, hitting almost every day, [and] I [have] a team practice on Sundays.”

In the meantime, McLaren said that he has reached out to numerous schools via email to express his interest in their programs, given the lack of face-to-face recruitment.

“I mean, it might not seem like much now, but down the line you don’t know––they could show up at one of your events, you won’t even notice them in the stands, and they can reach back out to you,” he said. “It’s all gain and there’s no real loss you can get from doing that.”

In addition, Condon stressed the importance of self-advocacy for athletes during this time. Whether it be compiling gameplay film to send to schools or just reaching out in general, Condon believes players should be proactive.

“Taking all that time–you are still training–but maybe the time that you’d be traveling to and from practices or tournaments or whatnot and [spend it] getting to know the school, really getting to know the coach, doing you research to really advocate for yourself and for why you can be a part of those programs,” he said.

The future remains uncertain for recruits like McLaren, but Condon emphasized the need for athletes to keep pushing forward.

He emphasized, “I would say just keep working on your craft, kind of take the recruitment reins in your own hands, really figure out what types of schools are the ones that you really want to be a part of and what communities you want to join…And it’s really just getting to know what the needs of a program are and trying.”