Remote Athletes stuck on the sidelines 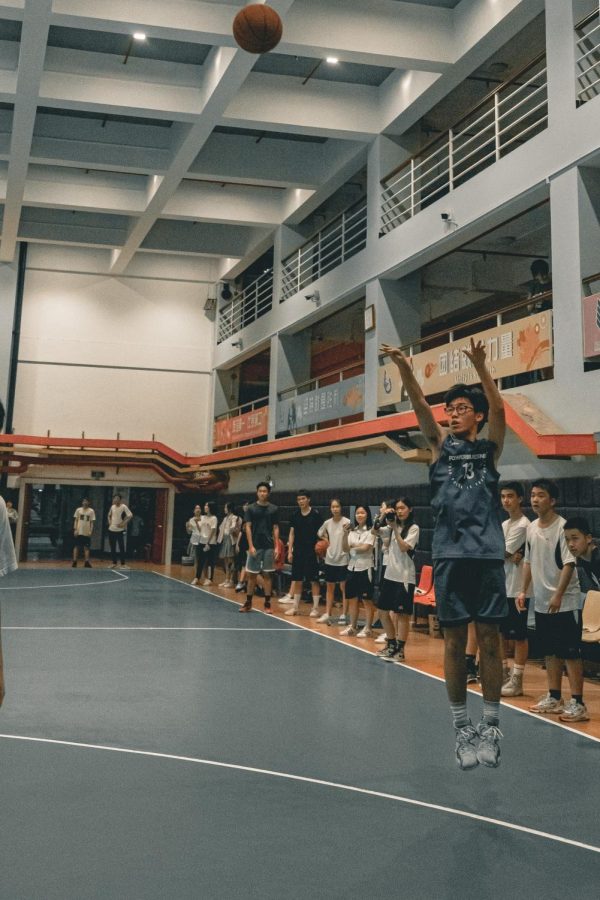 Junior Allen Ning takes a three-point jump shot at a local school in Guangzhou, China. Ning practiced with his local basketball team this past season, but he was unable to play in any games because he did not attend the school.

While a return to in-person team practices has provided many students with a sense of semi-normalcy and an opportunity to participate in the winter sports season, many remote members of the student body feel left behind. These students, many of whom are athletes and important leaders for their respective teams, have limited means of participating on their team this school year.

For senior Carly Grizzaffi, a member of the girls’ varsity swim team since she came to Masters as a sophomore, not being able to be a part of the team disconnected her from her teammates.

“The swim team has been a really big part of my Masters career. A lot of my friends are in-person and go to practices, so I definitely feel like I am missing out on socialization, and of course I just miss my sport. It’s definitely been a rough experience not being able to be a part of the team this year,” she said.

Grizzaffi noted that losing the opportunity to swim for the team has also had an adverse effect on her academic life.

“Swimming was definitely my biggest academic reliever. I’m a pretty dedicated student and sometimes swimming was the only break I would have during the school week between studying and doing homework,” she said.

International student-athletes are also feeling the effects of not being able to be a part of their respective sports teams this year. Junior Sunny Shi, a foil fencer on the varsity fencing team, mentioned some of the difficulties of trying to be a part of the team while living abroad in a  country that is 13 hours ahead.

“I only attend two periods of class each day because it is too late for me. I don’t have any idea how people fence this year.” she said. “I will definitely appreciate any way I can practice or be a part of the sports team, but I have no idea how it could work. Even if it could work or if they had a special section it would still feel like I am missing something,” she added

Even though Shi is still able to fence in her own community, it does not make up for the fact that she cannot practice alongside her teammates at school.

“I was in a fencing club in China before I came to Masters. If I have time I just go there and practice, but they don’t have that same atmosphere or environment because most of my Chinese teammates already go to college or are in another city, so what I do there is just fence with the coach,” she said.

For junior Allen Ning, not being able to play on the boys’ varsity basketball team distanced him from his friends as well as made him miss being a part of something bigger.

Ning said, “A lot of my friends are from the basketball team and because I’m missing out this year I also wasn’t able to connect with the new members of the team… for almost four months you practice everyday for two hours and you go on the bus together and you eat together. I definitely miss that part.”