Book industry finds success through the ups and downs of 2020 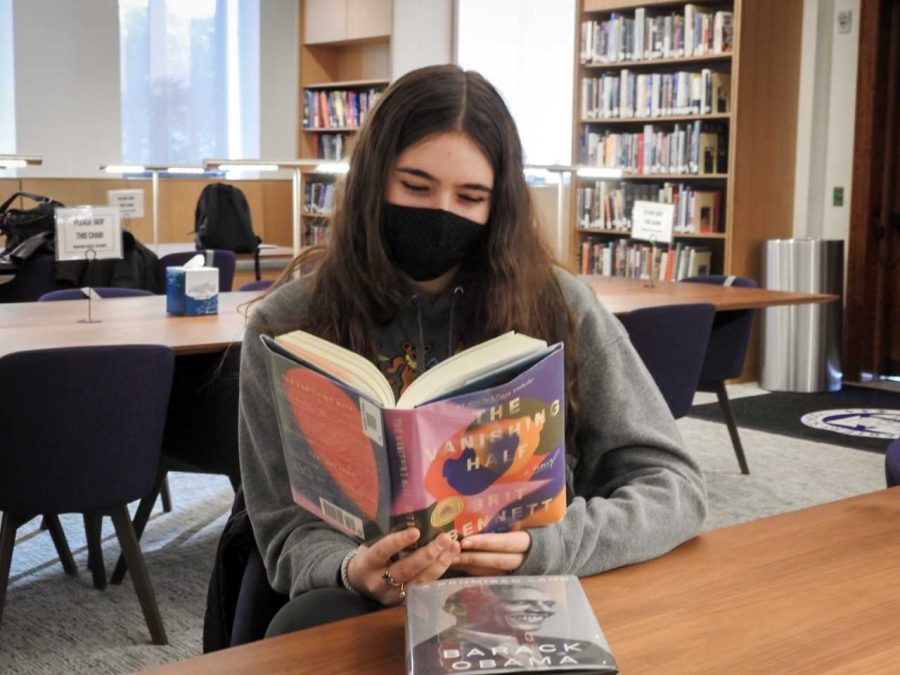 Masters sophomore Stella Simonds sits in the library reading. When the COVID-19 pandemic hit, the book industry went through many ups and downs, but ultimately found success in 2020.

The COVID-19 outbreak last March quickly bound millions of Americans to their homes, with nowhere to go and lots of time. Many found this to be the perfect opportunity to finally read the books they never had time for before the shutdown. Even though books were no longer as easy to access due to store closures, book sales were up nearly 8.2% by the end of 2020, according to Publishers Weekly. Print books have sold more in 2020 than any year over the past decade. Galapagos Books, a book store in Hastings-on-Hudson, benefited from this trend, although not immediately. The owner, Amada Abad, noted an increased interest and more sales. She observed, “Lots of people were coming in and wanted activities for their kids.” Her demographic consists mainly of the rivertowns. During this pandemic, her clientele was very supportive of the bookstore.

Abad claimed, “We struggled at first due to closure but sales picked up later in the year.” Masters student, Stella Simonds ‘23, said. “During the pandemic, there has been a lot more free time and opportunities to read… Especially during the summer when we were really on lockdown and could not do anything. I was obviously bored so I decided to start reading more. It was a great way to pass time.”

In early March, the store’s book sales dropped drastically. By the start of summer, however, Galapagos, and the book industry as a whole, was booming once again.

Lisa DiMona, a literary agent for Writers House based in Westchester County, said, “The biggest customer for the publishers is Amazon and the biggest retailer for the consumer is Amazon. Amazon is so big that they can discount the books in a way that an independent retailer can not.” Amazon also has fast delivery, which makes books easy to obtain.

When COVID-19 hit, Amazon was overwhelmed with orders. It had to prioritize the delivery of essential supplies such as Lysol, hand sanitizer, masks and toilet paper. As a result, book sales quickly decreased. This took a toll on both authors and consumers. With Amazon overloaded, DiMona found alternative methods to order books. For example, BookShop.org,  a website that collects and ships books from independent stores in a specific geographic area, became well known and used amongst publishers.

In the industry, publishers and literary agents tend to support Barnes and Noble as a full-service book store. According to DiMona, “the company had a terrible year.” In 2020 nearly 5,000 Barnes and Noble employees, most of them part-time, were laid off. More than 100 people in the company’s central office were also let go. However, according to a New York Times  article, Barnes and Noble’s executive chief said that because of the rebound in strong book sales, “things have not been as dire as expected.”

The past year’s events, specifically the killing of George Floyd and the Black Lives Matter movement which ensued, have sparked new interests and purchasing trends in the book industry. The protests which took place over the summer-inspired many to buy books that focused on race and equality. Authors such as Robin DiAngleo and Imbram X Kendri had a spike in sales.

During winter break, Masters chose The Vanishing Half by Brit Bennet as their community read. This book focuses on issues of race. As part of Masters’ Martin Luther King day celebration, Brit Bennett came and spoke, and answered questions from Masters students.

Simonds said, “ I really enjoyed this book… It’s crazy how much The Vanishing Half  related to the situation that is happening right now and over the summer during the Black Lives Matter Protests.” Simonds added that she hoped that in 2021 “Black and POC authors gain the same recognition as white authors.

Simonds said, “You can get lost in books really easily which is nice… Especially with all the horrible stuff going on in the world you sometimes feel quite helpless. Its nice to have a productive distraction.” DiMona claimed “People wanted lighter entertainment. People needed things for their kids to do.” They massively needed any kind of project-oriented book or reading with instructions.”

2020 was a big year for children’s books, too; however, major companies such as Scholastic still struggled. They no longer could host annual book fairs because schools across the country were closed. Scholastic reported earnings for the second quarter of the 2020 fiscal year, which ended on Nov. 30. Total sales were $406 million, down 32 percent from $597 million the previous year.

And as the year closed, self-help books have become increasingly prevalent, as they often do at the end of the year.

“It will be really wonderful when we can walk into book stores once again and pick up the books we love, DiMona said.