Playing for the gain not the love of the game 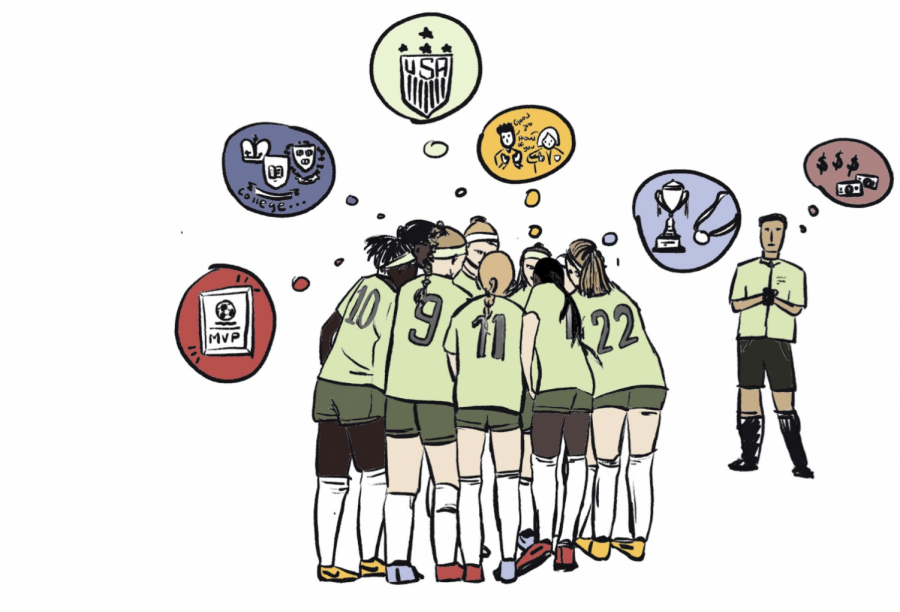 ALTHOUGH SOCCER IS A sport built on collaboration between teammates, individual incentives tend to take priority in a team setting. Schlossman believes players tend to become distracted by outside motives rather than play the game for enjoyment. At Masters, Schlossman finds that unlike her club team, her fellow teammates play for the fun in the game.

I started playing soccer when I was four. From the time I first kicked a ball, I fell in love with the sport and its culture––it was my outlet. My love for the sport was further cultivated while playing on my town recreational team. Our group worked as a unit and we built the team environment around a collective love for soccer and through the connection we held with our coach. I centered my life around soccer; it influenced every decision I made and kept my goal in sight of one day playing at the next level––either in college or professionally.

When I learned to play soccer, I was playing for my team, not for myself. The culture of soccer is built around working as a member of a team. However, too often these days, the team-oriented culture of soccer in the United States has become lost, as the sport has moved  towards competition between individuals–even those on the same team–for opportunities outside of the game. Pressure from society to succeed as an individual, whether in terms of college placement or landing scholarships, has removed the collaborative aspect from the sport that is built upon collaboration itself.

Perhaps this is a particularly American phenomenon. The competitiveness of college culture and the hamster wheel of getting into a good college, so you can get a good job, so you can “be successful” trickles down and affects every element of teenage life in America, including youth soccer. In other countries, it is easier to find people connecting to soccer because of their love for the game and the community. Such can be seen in Brazil, as Brazil soccer is a part of the culture. Known as “o país do futebol” (“the country of soccer”), the passion for the sport is evident throughout the country, while in the United States the motives for playing are intertwined with the country’s obsession with success.

I saw an obvious shift in the culture of soccer once I started playing for a club team rather than my local neighborhood team. Club soccer threatens to strangle all the joy out of the game; the staff is instructed to teach us to make the club better, not to improve our technical skills or bond with our team. This established from the get-go that the priority of the team was to do well individually, not to build a healthy team dynamic, which is essential to succeeding in the sport.

In contrast, one of my first experiences when playing on the Masters’ girls’ soccer team was to build team dynamics through bonding exercises. In my club team, the bonding was left in the hands of players and was limited by our strict coach. The difference between these two teams’ success and work ethic was apparent, as my highschool team communicated and worked together on the field, while a majority of the players on my club team fall into the category of being “ball-hogs” — a term used to describe a player who purposely does not pass the ball to their teammates, hurting their team’s success by taking away the team’s collaboration.

My club soccer coach sat my team down this past weekend and asked us “why do you play?” The responses were discouraging, yet not surprising, as I found out that I am one of only five players on my 22-player team who plays soccer because I love it. Most of my teammates are playing for their own gain, not for the love of the sport or the pride of being part of a team.

The game of soccer I grew up loving feels threatened  by this as the anti-team dynamic continues to grow.  Whilst my teammates and I compete onwards to see who will achieve our shared ultimate goal of playing in college, we grow farther apart because of the barrier between us and the gut feeling that we are all competing for the same thing––to play at the next level.

The emphasis on individual competition doesn’t inspire a love of soccer for the sake of the game. It emphasizes a cutthroat, competitive, ends-justify-the-means mentality––which is simply harmful to the sport.

The dedication and spirit which I have for soccer is what inspires me and motivates me to continue to push myself to compete––but just as important are the relationships I have formed. There must be a change in the culture of soccer, a return to the love of the sport purely for the enjoyment of playing and a way to re-establish and inspire players to rediscover their love for the essence of the game.