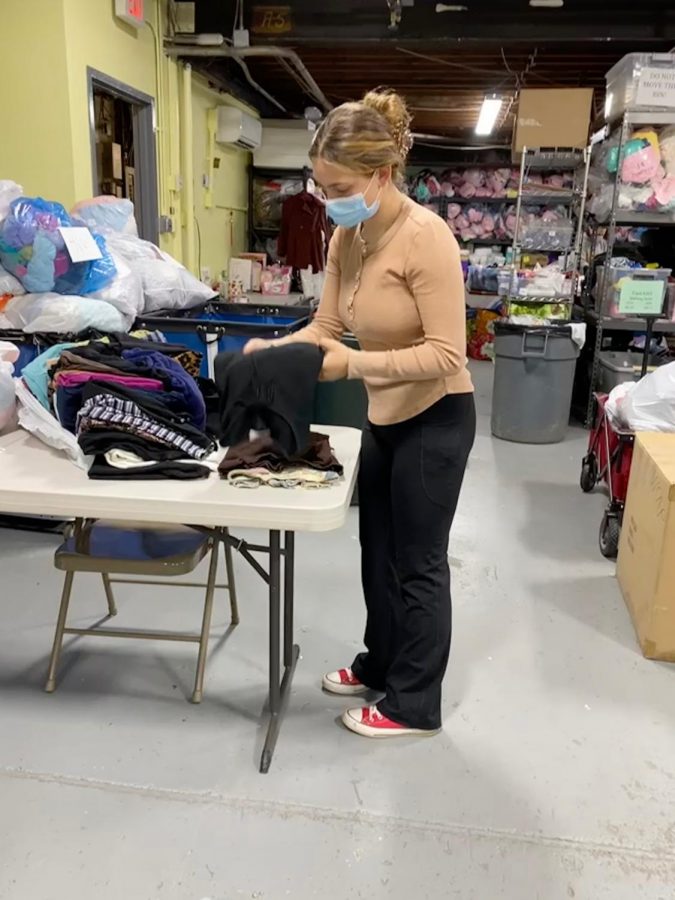 Junior Lily Schwarcz has donated and sorted through hundreds of pounds of clothing for over three years at Sharing Shelf, a clothing bank in Port Chester which aims to combat clothing insecurity in the county.

Westchester is considered one of the country’s wealthiest counties, yet a quarter of children that live there are from low-income households that may not be able to purchase clean or sufficient clothing. In addition, nearly 14% of Westchester children are chronically absent from school and clothing is one critical cause, according to the Sharing Shelf website.

Prior to volunteering at Sharing Shelf, Schwarcz would drop-off clothes at Goodwill, but later realized that Sharing Shelf provides clothes directly to those in-need, rather than requiring a fee at a lower cost.

“The volunteers are not there when kids come to pick-up the clothes, just to make them feel comfortable. We want to make it as if they were going shopping at the mall,” she said.

While COVID-19 forced Sharing Shelf to close its doors to volunteers from March until August, Schwarcz continued to drop-off clothes at the warehouse. Volunteers who donated clothes during those six months were not able to assist in helping to organize the clothes by gender and size, which slowed down the process since only lead volunteers were allowed inside.

When August arrived, the volunteer environment changed dramatically. Masks covered smiles and the number of volunteers permitted dropped from 15 to five. Usually, Schwarcz could spend up to four hours organizing clothes and prepping for “shopping” events, but now the time is limited to an hour in order to sanitize the space.

Although there have been challenges, Schwarcz said she still feels motivated to help those in-need because she understands the impact Sharing Shelf has on its community.

“It’s really nice for the kids less fortunate than us to get clothing in a normal environment so that they can ‘feel’ like the other kids, because a lot of kids tend to get bullied for the clothing that they’re wearing if it has holes or outdated,” she said.

Schwarcz said that the ability to get clothes that are “in-style” has a serious mental impact on children because they could be judged by fellow classmates for wearing dirty or ripped clothing.

The biggest reward for Schwarcz occurs after the children have stopped by the warehouse.

“Coming back and seeing that all the clothes are gone, knowing that kids are able to take these clothes home, and feel better about themselves,” is the best feeling for Schwarcz. “And sometimes, they leave notes for the volunteers to say ‘thank you,’” she said.

NOTE: If you are interested in learning more about how you can get involved with Sharing Shelf, email: lily.schwarcz@mastersny.org.