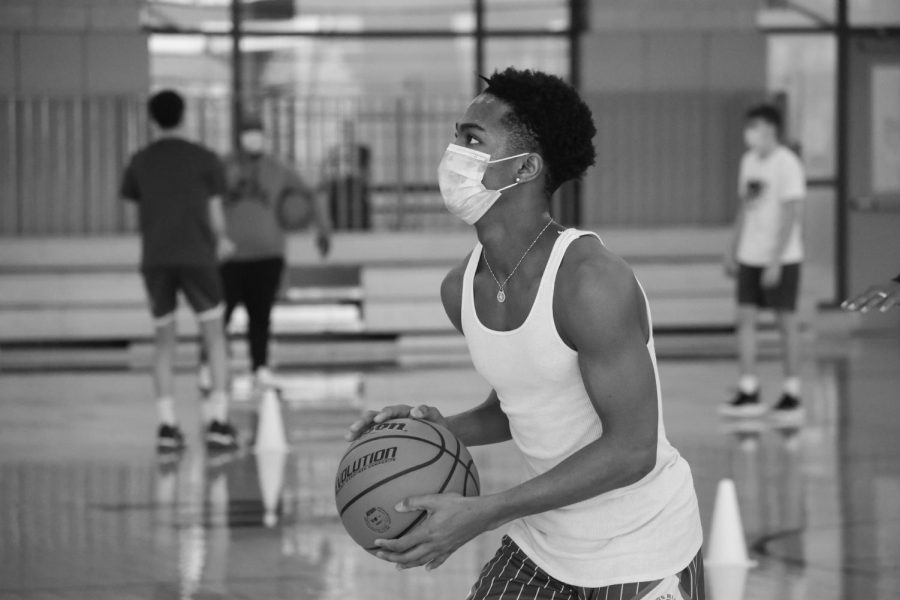 Stephon Marbury II prepare for a three point shot during a boys' varsity basketball practice. Students play with masks on to ensure the safety of themselves and others. Towards the end of the season, the team was able to scrimage in keeping with proper regulations.

Masters, along with many other academic institutions, has had to adapt its athletic programs significantly as the pandemic has continued. Guidelines for what can be deemed safe have been passed down from New York State to individual schools. The state has determined the protocols and the schools have had to shape their programs in line with the requirements.

The communication regarding regulations begins with conversations between The New York Public High School Association (NYSPHSAA) and governor Andrew Cuomo’s health advisory team. In these talks, different sports are determined to be high, medium, and low risk. In turn, these conversations are reported down to the local Athletic Directors of leagues that Masters is in, who then inform the schools about what is or is not allowed.

Masters’ Athletic Director Logan Condon said, “The reality is the state has dictated a lot of what we can and cannot do.” A major source of the regulations for individual sports come from NYSPHSAA’s frequent press releases. NYSPHSAA is New York’s governing body for most public school athletics. Masters have been instructed by the state and leagues to take the guidance that NYSPHSAA is providing and use it as a basis for athletic protocols at the school. Masters receive weekly updates from local AD associations along with press releases and updates that NYSPHSAA publishes.

Due to the large number of schools in New York State, the information given by the state is typically general, rather than school-specific. This has often left the interpretation of the guidelines to the schools themselves, which can be a challenging process.

“The initial part was just trying to figure out and consolidate all the information to find what best fit what we were able to do as a school,” Medina said.

As information and guidelines are gathered, decisions are made internally. “We take the information we get and then go to our health advisory team and present what we can and cannot do [from the state’s guidance], and we get their take on it,” Condon said. He continued, “In the fall, the state gave the guidance to be able to play interscholastic [games].

In one example, the state gave the school permission to play without masks if the athlete was struggling to breathe and participate with them on. Since Masters’ COVID-19 community agreement prohibits any lack of mask-wearing on campus, Condon declined the permission.

On Jan. 22, Cuomo announced that individual districts in New York State could determine if high-risk sports were allowed as of Feb. 1. The state granted individual districts the ability to determine if competitive sports were allowed. The districts passed that ability down to individual schools to make the decisions for themselves. “The state wanted to give more control to the schools to have the ability to adapt to those changes that [the state] was wanting to have in place,” Medina said.

With this new guidance, Masters started to make adjustments to what the protocols were for the winter sports. For basketball, the practices changed from individual workouts to being allowed to share basketballs and have a degree of contact involved.

Although schools are allowed to individually determine what they believe is safe, Masters remains in contact with other independent schools in the area such as The Hackley School, Rye Country Day School, Riverdale Country School, Ethical Culture Fieldston School, Horace Mann School, and other independent schools in Connecticut. “We are fully in alignment with [these] independent schools. We are constantly in contact within our leagues to discuss what other schools are doing,” Condon said. “I am very grateful for our leagues and fellow ADs for being very transparent and being a group of individuals who are sharing any information we get.”

Contrary to Masters, public and Catholic schools have varied in their regulations, as many are running full-squad practices and some others are holding competitive games with other schools.

Looking towards the spring, the state’s shift in guidelines this winter has allowed there to be discussions regarding spring sports taking place. “[The state’s] recent clarification on high-risk sports has opened up the door, but we are still waiting for sport-specific guidance,” Condon said.