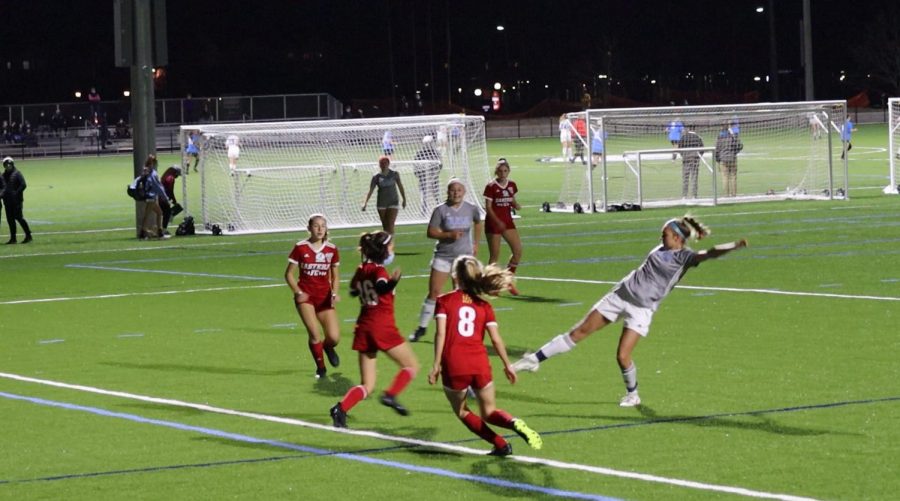 The Eastern Football Club 2004 girls team defends a shot against SUSA Football Club in a game in Nov. 2020. The game, which was played as part of the SUNY Purchase Tournament, ended in a 1-1 draw.

It is common for athletes of all ages to join private sports clubs to help improve and advance their skills. However, there have been some complications to the 2020-2021 season.

Private soccer clubs are organizations intended to further develop  individual player’s as well as team’s skills so they can compete at the highest level.

With COVID-19 still maintaining a firm grip on day-to-day life, soccer clubs have managed to create a fun and impactful learning experience, even with the strict guidelines which have resulted from the pandemic. When the pandemic hit the United States in March, many clubs  moved online and turned to platforms like Zoom and Google Meet to communicate and move forward with their work. Eastern FC is one of many that shifted from their usual outside practices to an online setting.

Some coaches have taken advantage of this transition, creating a workspace that focuses on tactics, position work and team formation and position. Coach of the Eastern Girls 2004-2005 (the years reference the age group of the players) teams and history teacher Brendon Barrios said, “We decided that we would continue to try to have the teams do some virtual classroom learning––things that we didn’t have the opportunity to do during the season.”

Sophomore Lauren Marlowe and player on the Eastern Girls 2004 team said, “since there was no outside communication (due to the lockdown) we were just stuck in our house, so having the hour to interact and work out was really fun.” Though sometimes having too much of a good thing can be boring.

New York State’s lockdown began during the start of March, which was when soccer clubs within the facility started training online. However, once it was lifted in early August, sports clubs were able to meet in person again and the safety measures were put in place to keep everyone Covid-free.

Each player was required to wear a mask at all times, and boxes were drawn onto the field six feet apart, so that each athlete could practice in a socially-distanced manner, and temperature checks were done before a player could enter the field.

Within the boxes coaches lead the players in footwork drills, fitness work, and tactical lessons.

“It was better because we were outside and got to see people even though you were in these 10 by 10 boxes, but it got boring overtime. I wouldn’t want to do it again,” commented Marlowe.

As time went on, and the strong fear of Covid slowly went away, soccer clubs began letting their players take off their masks during practice, depending on the location; this only happened if the field (the players practiced on) approved of players taking their masks off, if it was an indoor field masks were required. However, some parents and players made the decision to not go to indoor practices even with the facial masks required.

Marlowe said, “Even though we are wearing masks, it’s a much tighter space, and we are all much closer.” She continued, “I mean it sucks that I can’t go and play with my team because I love my team, but I want to be safe and keep my family safe.”

Though teams were able to play in person, regulations were still immense. Official matches and tournaments were initially cancelled and teams were not allowed to travel or compete across state lines. Competing competitively was out of the question. This made acquiring game footage — video footage of the player during games to show college coaches their skills — nearly impossible and put a huge strain on high school juniors and seniors applying to college and looking to get recruited by coaches.

Identification Camps, also known as ID Camps, are sessions hosted either by college coaches at their University or by Soccer Organizations at a well known field where college coaches are able to attend and watch the players. Many highschool soccer players attend these sessions to show the coaches how they play/their skill set and hopefully stand out and get recruited or noticed by top colleges.

For many, senior year is a time to reflect on the past three years spent at school and a chance to do everything one last time. Due to COVID-19 shutting down the fall sports seasons, many senior college athletes were ripped away from their final season. Because of this, colleges granted an extra year of eligibility for seniors, regardless of whether or not they had a 2020 season. This means that there are going to be less spots available for the upcoming players and a harder time being recruited.

This puts Class of 21’ at a disadvantage. Most high school seniors athletes are deciding to take a gap year to focus on their skills and have a better chance to get on a good college team. Senior Franny Mann has dealt with the consequences first hand, “A gap year would give me a year to improve my skills and compete for a spot in a little less competitive pool next year.”

Though COVID-19 is still a major part of our lives, soccer clubs have started up games and tournaments again. Which gives young athletes the opportunity to get back to work and continue on their soccer careers.