Review: WandaVision is a must-watch 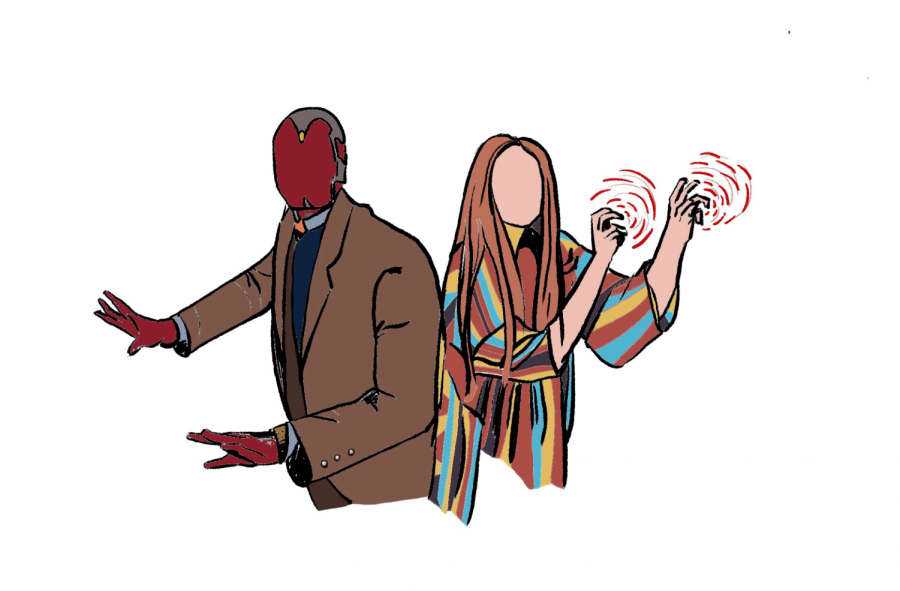 WandaVision has burst onto the entertainment scene as a brilliant, mind twisting television series that has defied the expectations of typical superhero media.

WandaVision has burst onto the entertainment scene as a brilliant, mind twisting television series that has defied the expectations of typical superhero media. It is a beautiful blend of science fiction, mystery, drama and romance that highlights Marvel Studios’ unique ability to create a captivating superhero story, even if it starts out as a 1950’s black and white sitcom. The series starts out cheery, as protagonists Wanda Maximoff (Elizabeth Olsen) and The Vision (Paul Bettany) move into the small town of Westview, N.J. after just getting married. They attempt to fit in with the townspeople, despite one wielding powers of magic and telepathy strong enough to destroy an Infinity Stone and one being a synthezoid made of vibranium. But their happily ever after isn’t achieved in WandaVision, as we learn that the version of Westview the couple settled down in was a reality created by Wanda; an accidental product from her accumulation of immense grief, suffering and pain.

As an avid Marvel fan, I was skeptical of the series at first. I was expecting the show to connect back to previous movies, give a fulfilling character backstory and set up future Marvel movies, and I was unsure of how that would be achieved with the show switching the decade it takes place in every episode on top of sitcom format. But I was beyond impressed. This show was action-packed and thrilling, yet bittersweet and emotional, revealing Wanda’s tragic backstory and the birth of The Scarlet Witch, along with a goodbye from Vision. The acting from many characters demanded a wide range of techniques that were all hit gracefully, bringing emotion to this series.

WandaVision was incredible with setting up for future MCU movies, with Agent Monica Rambeau (Teyonah Parris) gaining her powers of energy absorption, generation and manipulation to play into the second Captain Marvel movie, and disclosing that Wanda holds more power than the Sorcerer Supreme (Doctor Strange), which will segway into Doctor Strange: Multiverse of Madness and Spiderman: No Way Home. Not to mention other characters who might make appearances in the future, such as “White Vision” and Darcy Lewis (Kat Dennings).

As brilliant the show may be, from production, to script, to wardrobe, to acting, there are still a few sour notes in the plot overall. When Wanda’s Westview reality was ending, that meant that Vision and their twin boys would go along with it. Wanda’s goodbye from Vision was a heartfelt moment that could bring viewers to tears, yet it was phrased as a temporary goodbye. Not only does this make Wanda’s urgency to keep Vision in Westview unreasonable, since she could potentially see him again outside of this false reality, but it takes away from the overall emotion in the scene. While this may play into later movies, it leaves the series hanging on an unsatisfactory note.

Regarding the show’s antagonist, Agatha Harkness (Kathryn Hahn), it was interesting how the show framed her. For the majority of the series, Wanda was the one painted out to be the villain; the one who essentially kidnapped a town and had them all share her anguish. But the real villain all along was another witch, Agatha, who had disguised herself as Wanda’s nosy neighbor Agnus. Hahn deviled a beautiful performance as Agnes, but Agatha Harkness’s character felt one-dimensional. It seemed as though she wanted power just to have it instead of a clear motive. However, Agatha’s sadistic plan to find the root of Wanda’s powers did allow the viewer to find out more about Wanda’s tragic past, and how she as the Scarlet Witch was destined to be damned, which helped bring a sense of understanding to Wanda’s actions.

Overall, WandaVision is an excellently crafted mini series, and it leaves viewers in suspense as the words “Please stand by” flash on the screen during the credits. To get the full experience of the show, context from previous movies such as Avengers: Age of Ultron, Avengers: Infinity War and Avengers: Endgame are needed, but it is completely worth the watch. All nine episodes have been released on Disney +, so if you are looking for a new TV binge, this is the top of my recommended list.