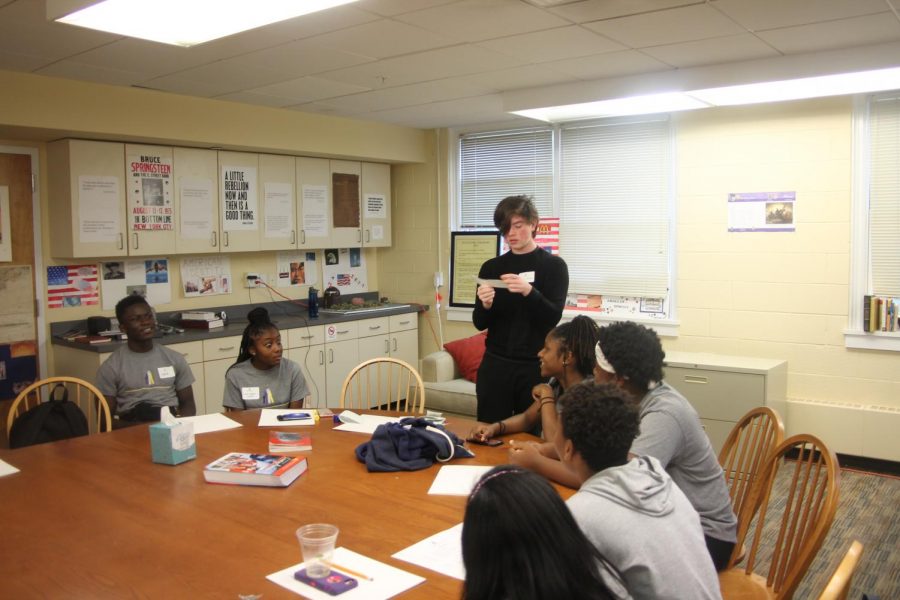 Students sit around a harkness table inside of a history classroom. "Africana Critical Thought: Race, Theory, and Empowerment" will be a new course offered for the 2021-2022 school year. This will be the first time Masters has created a major course solely dedicated to African history.

Creating an African Studies course at Masters has been a desire for many students, and next year, their wishes will finally become a reality. Upper School History teachers Brendon Barrios and Selas Douglas first began shaping the “Africana Critical Thought: Race, Theory, and Empowerment” course a few months ago, and it was recently approved by the administration. The year long major will be made available for juniors and seniors at the start of the 2021-2022 school year.

In January, 74% of students who responded to an informal Tower survey expressed interest in taking an African Studies course if it were made available. Students were pleased to learn that a structured African History course would soon be integrated into the curriculum.

Junior Briana Diaz said she was proud that Masters has finally created an African Studies course, but had hoped it would come sooner. Since Diaz will be a senior next year, she said her schedule may not allow her to take the course. However, she would like to see juniors take advantage of this opportunity.

Sophomore Niamh Fortuna responded to the January survey with an interest in taking an African Studies course. Fortuna said she still remains interested in taking the recently created course, come the fall. She believes this course will be beneficial for students of all races and envisions it will be able to expose students to uncovered historical knowledge.

“It’s an important subject that our education has been lacking,” Fortuna said. “They’re so many misconceptions about African culture, even just based on what we’ve learned in school.”

Azzan Thomas, a current eight grader, said he would “definitely” consider taking the course once becoming a junior.

“In the Middle School, we have diversity [and] inclusion clubs, but a whole class dedicated to African learning is really exciting,” Thomas said.

When considering topics to cover, Barrios said he took into consideration suggestions from students, which allowed him to get a sense of what they had hoped to see in an African Studies course. Barrios said he also received feedback from diversity ambassadors regarding their ideas and concerns.

Both Barrios and Douglas said the course is not specifically focused on oppression and colonization, but rather on the African diaspora, afrofuturism, studying and empowering African narratives, and black excellence.

Barrios describes afrofuturism as a counter to the narrative of slavery, imperialism, and colonization. Instead, it urges critical thinking about how people within the African diaspora can reimagine themselves and shape a new narrative for the future.

Douglas added, “It’s so important for us to be able to consider a variety of perspectives, and to be able to hear different narratives.” He continued, “It’s more of shining a light and saying some of these ideas and people have been hiding in plain sight, and we just need the opportunity to engage with what they’re talking about and what their contributions have been.”