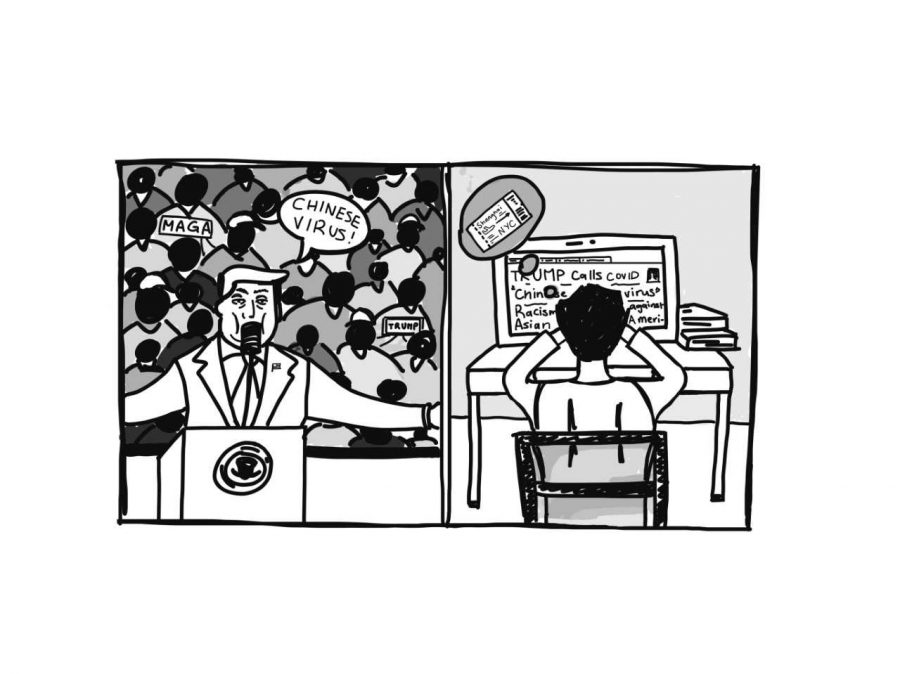 Asian students have felt a wave of hate resulting from the COVID-19 pandemic.

As the death rate of the COVID-19 virus continues to accelerate, people from all around the world are anxiously waiting for a responsible solution from their respective governments. Tony Wei, a sophomore from China, currently studying remotely, strongly disapproves of  President Donald Trump’s calling COVID-19 the “Chinese virus” in public addresses and remarks.

“ After watching the presidential debate, I think Trump calling it a Chinese Virus is unjustified because COVID-19 is not just a Chinese problem, it was also amplified by the poor decision of the Trump administration. Thus, although the virus originated in Wuhan, China, the President of the United States, as a political figure, should not name the virus after China. At the end of the day, COVID-19 is a worldwide issue and we should all come together to solve this problem instead of blaming each other.”

Wei compared the situation to the H1N1 influenza (also known as the Swine Flu)  in 2009, wherein the Chinese government never referred to it as an “American” virus, even though it originated in California.

According to the CDC (Centers for Disease Control and Prevention), the infection of the H1N1 flu was first found in a 10-year-old girl in California, and later spread to 214 countries accumulating approximately two hundred thousand deaths, and triggering a global pandemic, as confirmed by the World Health Organization in June 11, 2009. According to the National Center for Biotechnology Information, there had been 2,090 cases found in Mainland China with 800 deaths.

While arguing about Trump’s wrongful accusation, Wei did concede that the Chinese Government must take charge of not paying attention to Dr. Wenliang Li’s early warning of the virus and putting him into jail. He stated that if the Chinese government had listened, the virus could have been contained in a shorter period of time and may not have spread across the globe.

Wei also mentioned the rising tension between Americans and Asians as a consequence of Trump’s accusation. There is a long history of the U.S. excluding and vilifying Asians dating back to the 1880s, and as the United State’s national bias towards Asians gradually subsides, Wei is anxious about the negative influence Trump had on his supporters by blaming an entire race of people. According to San Francisco State University Asian-American Studies, hate crimes against Asian descendents around the world have increased by 50% since the start of the pandemic (February 9 to March 7). One sixteen-year-old Asian student from Los Angeles was wrongly condemned for bringing the virus to school and was seriously wounded by three white peers only to declare himself as Non-Chinese.

Wei said,“ I lived in the U.S. for more than ten years, but I’ve never worried about being discriminated against. However, after more cases regarding Asian discrimination emerged during the pandemic, I’m feeling anxious about my life after returning back to campus.”