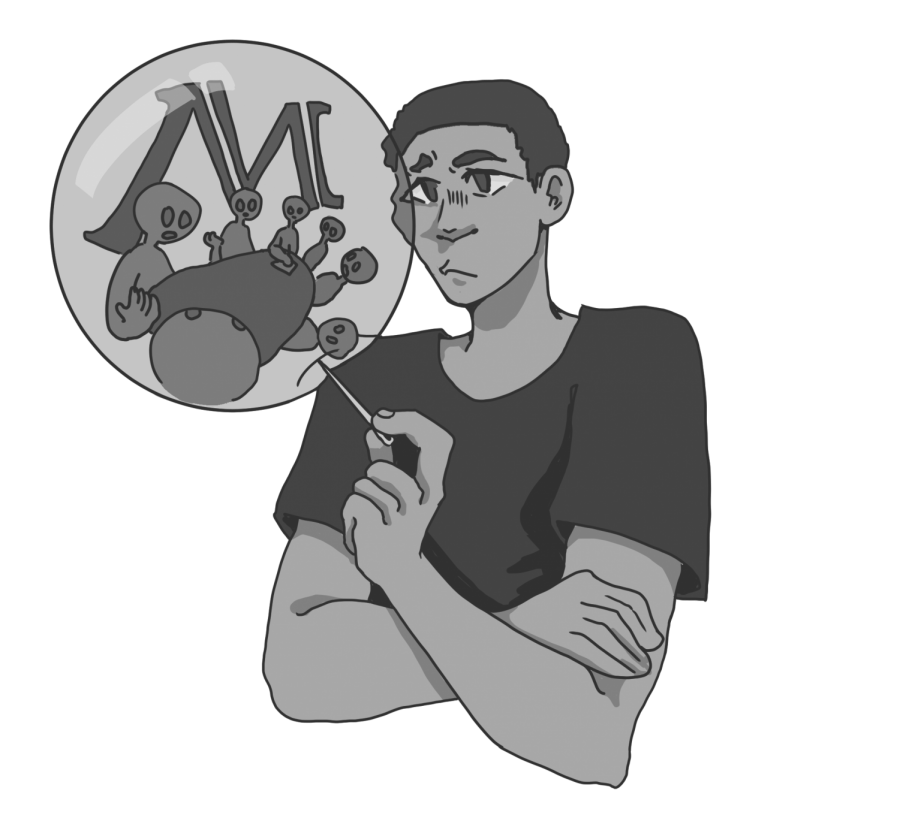 At this point, it’s almost cliche. Masters is a “liberal bubble.” It’s a term that’s thrown around so casually in conversation it’s almost lost its meaning. But have you ever wondered why we call it a liberal bubble, not a liberal wall, or a liberal cage? Because it’s meant to be popped. It shouldn’t be too difficult.

But at Masters, we’re not even trying.

This community says they care about all voices and promote diversity of thought, but too often we don’t do that when it comes to political thought. People in this community aren’t listening and they’re creating a toxic environment that makes it hard for those with dissenting viewpoints to speak their mind. Something needs to change.

In January, one of my teachers told my class that, had there not been a deadly insurrection on Capitol Hill the day before, “we” would have been able to celebrate the election of two Democratic senators from Georgia. If I had happened to be a Republican devastated by the Georgia election results, I would not have felt comfortable challenging my teacher’s assumption after they already established the collective viewpoint that “we” all supported Jon Ossoff and Raphael Warnock.

A student one of my other classes claimed that all Trump supporters are unkind, uneducated and not good people. This statement leaves the impression that this person can’t possibly care about one of their classmates, whose dad, the person she loves the most in her life, is a Trump supporter. This student openly shared this about her father, and also made it clear that she herself is not a Trump supporter – yet she was still labeled “privileged” by classmates for backing her family member.

But let’s step back. There’s another privilege that students at Masters need to recognize. Regardless of whether you pay full tuition, or have a full scholarship, Masters students are receiving one of the best high school educations in the nation. Students here have a forum to discuss the complexities of topics such as race, gender and religion, but we are too often blind to a large portion of Americans whose situations do not provide them the capacity to prioritize these issues.

Take the farmer in rural Nebraska who supports Trump’s trade policies because she feels they will help her make a larger profit and ultimately afford to pay her rent. Or the mom and pop business owners in Vermont who favor Trump because he pushed a faster Covid reopening which allowed them to keep their business afloat. These people, and so many others are fighting for survival, and for them, choosing who to vote for is simple: whoever they believe will support them the most financially. Students making broad allegations about Trump supporters imply that they do not care about understanding these voices – the unique and varied voices of the 75 million individuals who supported the former president in the last election.

I tried to amplify the voices of conservative-thinking Masters students in interview panels leading up to the election. But time and time again, these individuals declined my interviews. Every time, the reason was the same: “I’m sorry, I just don’t feel comfortable.”

Do you ever wonder why we’re so divided? Yes, a lot of it is because of the former president – his rhetoric, policies and embrace of lies and conspiracies. But some of the blame should go on us. We’re settling for political division because we refuse to take the time to hear and consider the other side.

Masters is a liberal bubble. But the world is not. And while political intolerance may fly at a school where it is not only enabled, but defended, it will not be received in the same fashion in other walks of life. Masters needs to do a better job preparing students for this reality, and preparing its teachers to properly address moments of political tension in classrooms.

The school should utilize faculty professional development to focus on diversity, equity and inclusion training with regard to political thought and opinion. If the school intends to continue encouraging teachers to facilitate political conversations (as was done leading up to the 2020 Presidential election and following the Jan. 6 Capitol riots), then there needs to be a concerted effort by faculty to own their biases and unpack provocative comments that may be uninformed or hurtful to other community members.

If you read newspapers, follow the lead of the seniors in Political Science this year who are reading both the more liberal New York Times and the more conservative Wall Street Journal. Those who watch the evening news should consider bouncing back and forth between feuding networks like CNN and Fox News. Listen to what each anchor says. Observe the stories they cover, how they frame their narratives, and the guests they bring on. You won’t agree with it all, but at least you’ve taken the time to consider it.

Just as the school dedicates time to social justice issues on MLK Day, and religion and spirituality during Matters of Spirit, there should be a concerted effort to educate the community on the political system and a wide-ranging spectrum of views. The school should hold workshops or welcome guests who can speak to the issues of political intolerance and guide the community towards healing and a broader understanding of the complexity of the issues facing us today.