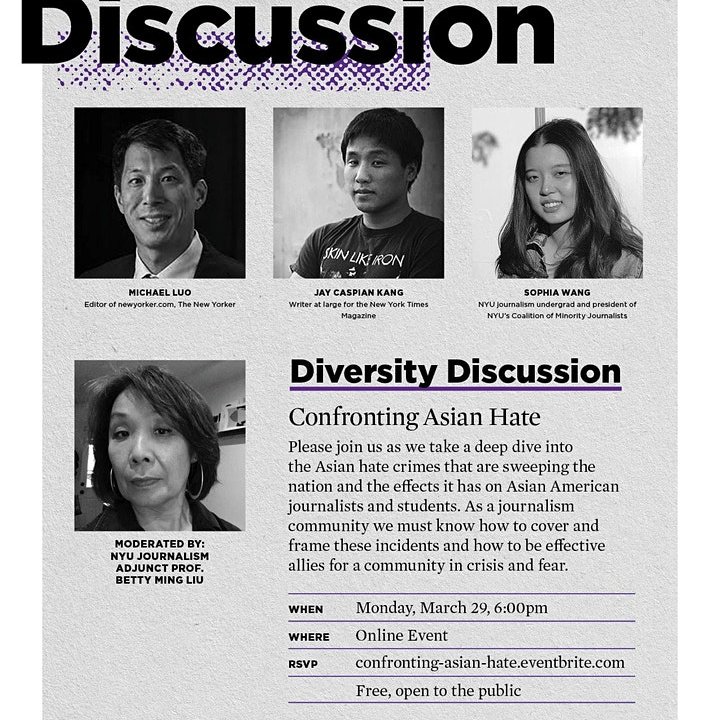 The webinar began with an introduction from moderator Betty M. Liu, an adjunct professor at the Journalism Institute, who cited the dramatic uptick in reported hate crimes against Asians, most notably the tragic mass shooting at a spa in Atlanta, Georgia, which killed eight people, including six Asian women, and feelings of despair in the Asian American community, who have had to deal with this in almost every aspect of their lives recently.

There were three panelists joining Liu: Sophia Wang, a senior at NYU studying journalism and psychology, an international student from China, and the president of the NYU Coalition for Minority Journalists; Jay Caspian Kang, a writer-at-large for the New York Times Sunday Magazine, a former correspondent for Vice News, and the co-founder of the ESPN sports and pop-culture blog Grantland; and Michael Luo, who is the editor for all of The New Yorker’s digital platforms, formerly an award-winning investigative journalist and metro editor at the New York Times, and who sparked a conversation surrounding anti-Asian hate five years ago when he tweeted about a woman who yelled at his family to go back to China with the now-viral hashtag #thisis2016.

The majority of the event was a question and answer session, with a wide array of questions surrounding anti-Asian hate specifically during the pandemic, the idea of identity in Asian American communities, the model minority myth and what journalists and editors can and should do next.

“I’ve never experienced something like this as an Asian American in this country,” panelist Luo said in response to a question about what seems to be different about anti-Asian hate right now. He also mentioned the influence that former president Donald Trump had on inciting anti-Asian hate with regards to the pandemic by using terms like “Kung Flu” and “China Virus” regularly during briefings.

Kang talked at-length about the meaning of identity in the Asian American community, the model minority myth, which characterizes all Asian Americans as law-abiding, successful, citizens and in turn tends to downplay the racism that’s experienced by the community, and the effects of this continuous discrimination on Asian people’s sense of belonging. He mentioned how Asian Americans are often categorized with white people in terms of privilege when in reality many face discrimination regularly.

“This has really become a moment for Asian Americans of reclaiming the label, person of color,” he said.

Wang offered her thoughts on what journalists can do to highlight these stories in an unbiased and anti-racist manner.  She recommended writing features on low-income Asian communities, who have felt the brunt of anti-Asian hate both recently and historically, and utilizing bilingual reporters who can dig deeper into these types of stories, and showcase the “real population” of Asian Americans, not just the wealthy, educated upper-class families that are seen as a representation of the whole community.

Learn more about NYU’s diversity initiatives in journalism and watch a recording of the discussion HERE.