Rally calling for due process in Cuomo investigation held in NYC 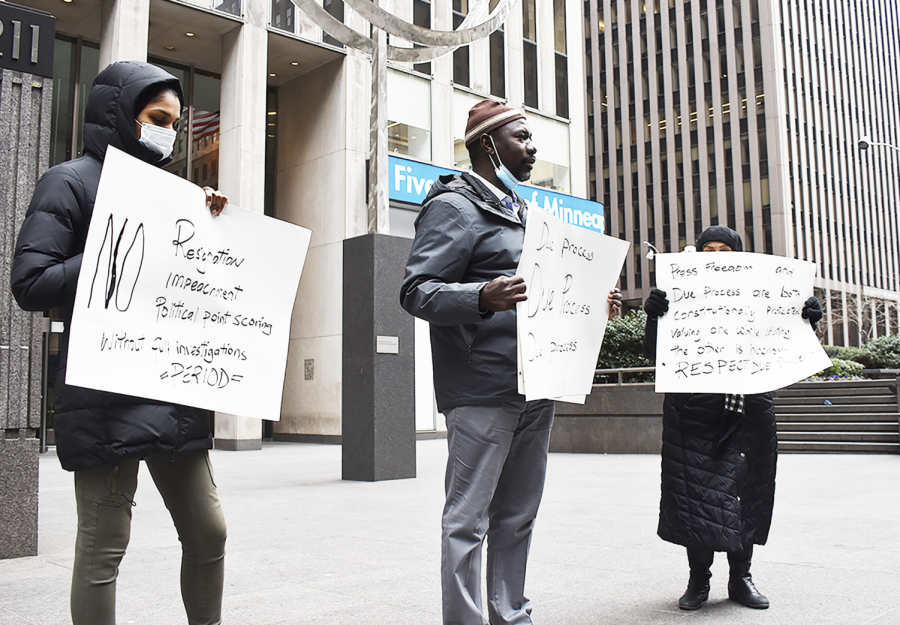 Protesters stand outside the headquarters of the New York Post and Fox News in Midtown Manhattan on April 3, 2021. The rally was organized by Sheikh Musa Drammeh (center) and called for due process in the investigation against Governor Andrew Cuomo (D-NY). Cuomo is facing several allegations of sexual harassment and has been heavily criticized for his handling of COVID-19 in nursing homes during the early stages of the pandemic.

Outside the headquarters of Fox News and The New York Post, a small rally was held on Friday demanding due process in the investigation of New York Governor Andrew Cuomo.

As of April 3, nine women have accused Cuomo of sexual harassment. He’s also under fire for the state’s under reporting of COVID-19 deaths in nursing homes during the early stages of the pandemic.

A majority of New York’s House Democrats and two senators, including Majority Leader Chuck Schumer, have said Cuomo should resign.

Drammeh, a resident of the Bronx, has held similar rallies defending the governor and the Constitution throughout the past month.

“We’re here because of the injustice being peddled by his enemies, using the media, just to sway public opinion. We’re here to say no. We refuse now, we refuse tomorrow, and we’ll refuse for as long as they continue their evil plan.” He continued, “We believe that the evidence will exonerate Governor Cuomo. But even if it’s not, Governor Cuomo still deserves his day in court.”

Drammeh also addressed the #MeToo movement, which he said he supports, but believes it is being used for political gain.

“It is being hijacked by those who want to score political points against their political enemies.”

Dianne Rodriguez, who is from Manhattan, NY, added, “These women were paid off to say these allegations against Governor Cuomo, or somebody wants him removed because they want his job”

Regardless of whether the allegations prove true, many believe Cuomo should step down because the scandal is diverting his attention away from pressing issues, like the pandemic. Cuomo has taken questions from reporters on just five occasions since Feb. 24, which is in stark contrast to the 91 times he spoke publicly with the press last March.

But for many in the Cuomo faithful, the scandal does not wipe away Cuomo’s 30+ years of public service.

Rodriguez said, “Either way it falls, I’m still gonna love him. It doesn’t matter what the investigation says.”