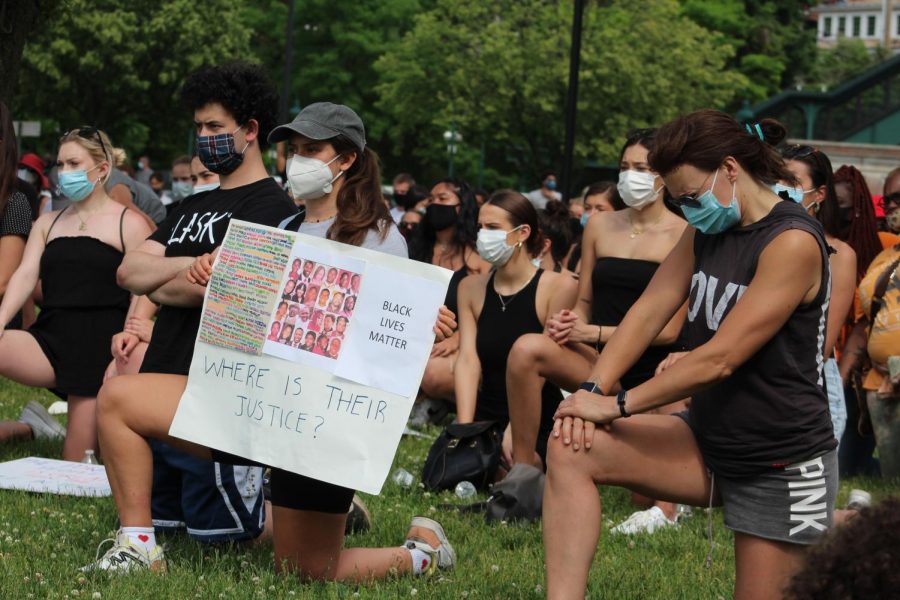 Protesters in Dobbs Ferry last summer kneel in honor of the lives lost to police violence. In May of 2020, the murder of George Floyd sparked protests across the nation. Now, almost a year after Floyd’s murder, the community is once again reflecting on systemic racism within the criminal justice system.

Of the 16,000 times that an interaction between a police officer and a civilian led to a civilian death since 2005, only eight have resulted in an officer being convicted of murder. Derek Chauvin, the former Minneapolis police officer who murdered George Floyd last May, was the eighth.

“Having knowledge of how policing has been done throughout the country, what it felt like was a pebble in a pond–there’s finally justice in this moment, but it is a long, uphill battle to climb,” Douglas said.

For many, including sophomore Claress Bahamundi, the conviction came as a surprise.

She said, “The day leading up to it I felt like I was holding my breath and when it was announced I was shocked.”

That feeling of mounting anxiety in the days and hours leading up to the announcement of the verdict was collectively felt by students and teachers.

Junior Maison McCallum expressed that his excitement at the guilty verdict did not reach the level he had been hoping for.

He said, “When I heard I did feel immediate relief, but at the same time, I think– unfortunately–this is just a very small step because it has taken nearly a year for the case to close.”

Floyd’s murder fueled masses of protestors to take to the streets in solidarity with the Black Lives Matter movement throughout the summer. Rather than viewing the verdict itself as a historical turning point, Douglas said that the protests and global visibility they attracted were the most important and felt more akin to a point of reckoning.

The prosecution argued that Chauvin acted outside the bounds of normal policing, and the first week of the trial was nearly filled by hours of tearful witness testimony. The defense presented an alternative narrative wherein complications from Floyd’s drug use were the main cause of his death.

The verdict comes 30 years, almost to the month, after the murder of Rodney King under a rain of police batons in Los Angeles. The officers in that case were acquitted of all murder charges. Douglas saw striking parallels between this moment and the national uproar 30 years ago.

“The reality is this isn’t a unique moment, this is part of the American brand, and we have been fighting this same struggle for civil rights for the entirety of the country’s history,” Douglas said.

A resounding sentiment among many students has been that while the verdict is holding Chauvin accountable for his actions, it is not by any means an act of justice.

Sophomore Amaris Asiedu felt that mentions of justice being served were well-intentioned, but misplaced in light of the centuries-long history of systemic racism in the nation. Asiedu found Senator Nancy Pelosi’s statement thanking Floyd for “sacrificing [his] life for justice,” to be particularly problematic.

“I don’t want people saying it’s a sacrifice for justice, because nobody’s life should be sacrificed for justice. It should be viewed as a tragedy that opened up people’s eyes,” she said.

She said, “Lives have already been lost, there’s no getting justice for that.”