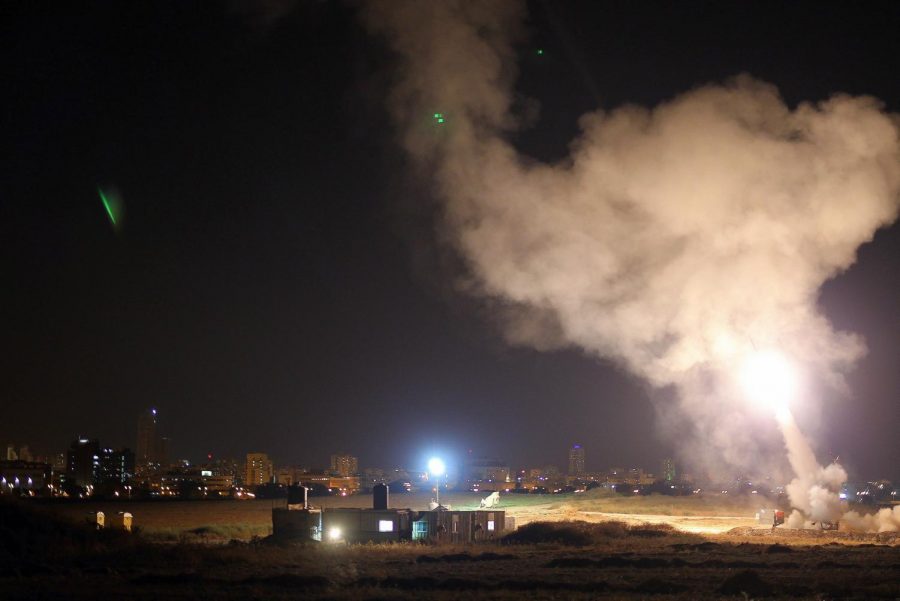 The Israeli Defense Force's Iron Dome system intercepts Gaza rockets aimed at central Israel. In recent days, Hamas has fired over 1,000 rockets toward Israel; the IDF has also launched airstrikes on Gaza, killing over 50 Palestinians. As tension escalates in Israel, individuals around the world are taking to social media to voice their opinions on the conflict.

Misinformed opinions on social media are fanning the flames of antisemitism, as the Israeli-Palestinian conflict escalates once again.

In recent days, tension has risen in Israel for a host of reasons, including an anticipated decision by the Israeli Supreme Court on whether to uphold an order expelling six Palestinian families from their homes in East Jerusalem. As the fate of the families looms, individuals in the Masters community and around the world are taking to social media to voice their thoughts on the controversy and recent violence in Israel; many are doing so in a harmful and inconsiderate manner.

Those who have not visited Israel, or have only read about it in textbooks, or seen images on TV or Instagram, can’t truly understand the significance that the only Jewish state in the world holds for practicing members of Judaism. Threatening Israel, whether through military action or rhetoric on social media, is a threat to Jews around the world.

I have been fortunate to travel to Israel three times. I was bar-mitzvahed in Israel at the top of Masada – the same fortress where nearly one thousand Jews committed suicide amid an attack by Roman troops in 74 A.D. I’ve prayed at the Western Wall, slept at a Kibbutz, and proudly walked the streets of Jerusalem chanting Hebrew prayers on Shabbat.

Israel is the only place in the world where I feel that my religion has been truly respected and embraced by the majority of the people around me. For others who have immigrated to Israel escaping religious persecution, have family there, or are perhaps more religious than me, I suspect this sentiment is only magnified.

Some like to argue that criticizing the Israeli government is not the same as hatred against Jews, but in many cases, that is simply not true. To say “f*** Israel,” or “free Palestine,” is saying that you don’t value a Jewish state (keep in mind there are 57 Islamic states and 15 nations in which Christianity has been deemed the state religion). Whether or not you agree with the policies of the Israeli government, the fact is, Israel is a symbol of freedom and protection for Jews who have been oppressed, demonized and scapegoated for thousands of years and still are in many ways today. Israel is a part of the Jewish identity, and is home to nearly one-third of Jews around the world, and they have a right, and obligation, to defend it.

It is crucial to remember that this recent controversy over the eviction of Palestinian families in East Jerusalem is only the latest spark in a forest fire that has raged for thousands of years in Israel. The modern conflict (which is largely a dispute over territory, rather than religion) is also incredibly complicated – to isolate one video on your social media feed of a “burning mosque” (which actually wasn’t burning) and claim “domestic terrorism,” “ethnic cleansing,” and “apartheid” is nothing short of irresponsible, and radically misinformed. Attacks launched by both sides have resulted in deaths, not to mention a collective sense of fear that is all too familiar for both Israelis and Palestinians.

To be clear, not all push-back against the Israeli government is automatically antisemetic. But as Natan Sharansky, an Israeli politician, details in his 2004 essay 3D Test of Anti-Semitism: Demonization, Double Standards and Delegitimization, “When the Jewish state is being demonized; when Israel’s actions are blown out of all sensible proportion; when comparisons are made between Israelis and Nazis and between Palestinian refugee camps and Auschwitz – this is antisemitism, not legitimate criticism of Israel,” and it is exactly what is happening right now on social media.

Failing to condemn the onslaught of rocket launches from Hamas (a terrorist organization) is a failure to condemn attempted murder of innocent Jewish lives – a trend all too common for Jews throughout history. The rockets have already killed at least five Israelis, including two of the Arab community. Alternatively, failing to condemn Israeli airstrikes on Gaza is a failure to recognize those who are suffering on the Palestinian side; over 50 have been killed, 14 children among them.

“When criticism of Israel is applied selectively; when Israel is singled out for human rights abuses while the behavior of [others] is ignored – this is antisemitism,” Sharkansky writes. Violence, on either side, is not acceptable; neither is the dangerous double standard of highlighting the offenses of only one side on social media. Choosing to only repost images of destruction in Gaza, for example, fuels a false perception that only Jews are to blame for the wider conflict.

Regardless of your familiarity with the recent details in developments, it’s important to recognize that, above all, the feelings of others matter. Sadly, when you broadcast a message to your hundreds or thousands of followers on a social media platform, this component is often neglected. Provocative comments and misinformed analyses of recent events are hurting Jewish people right now around the world. Before choosing to contribute to this pain, strongly consider how the content you resurface and the opinions you voice could be received by those who have a deep connection to the Jewish faith and the land of Israel.