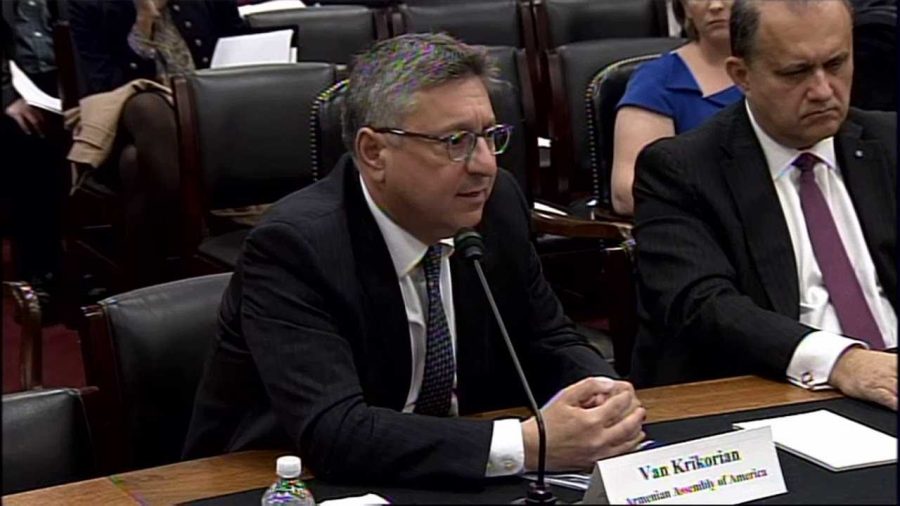 An image of lawyer and leader of thr Armenian Assembly of America, Van Krikorian, speaking to Congress.

Van Krikorian, a lawyer, law professor and co-chairman of the Armenian Assembly of America, addressed the Masters community at Morning Meeting on April 22. He discussed the history, impact and modern relevance of the Armenian Genocide, which was recognized by President Joe Biden for the first time on April 24, which is Armenian Genocide Remembrance Day. The Armenian Genocide was the first genocide of the 20th Century, in which the Turkish Ottoman government killed approximately 1.5 million Christian Armenians in the Ottoman Empire between 1915 to 1917. Krikorian emphasized how this mass killing and the lack of attention to it led to other genocides. Krikorian even noted that Adolf Hitler was likely influenced by the Armenian Genocide, since he once referenced the genocide in a speech in which he urged his forces to be merciless.

Ian Stein, a sophomore at The Masters School shared his perspective on being an Armenian American.

He said, “It means everything that Biden reconized the Armenian Genocide. The United States acknowledging the past is a great start to the healing process of my fellow Armeanians. I pray that one day Armenians can live peacefully. Hopefully the U.S. can now act as a meteor.”

Krikorian emphasized how this mentality still exists and accounts for other human rights violations and genocides around the world.  When governments think they can get away with such crimes and are allowed to, the tragedies continue. Krikorian then went on to describe how in studying genocide, we have learned that they start with thoughts and smaller actions, such as  stereotyping and propaganda, which ultimately lead to dehumanization. Those are the same trends we see with racism in the US and other places, so, it is important to be aware of the early warning signals. Studies have also shown how genocides go together with wartime situations, and he talked about the heroic roles US Ambassador Morgenthau and US consuls along with other Americans played at the time in trying to stop the genocide and help the victims.

Stein said, “Unfortunately, I haven’t been exposed to Armenian culture as much as I would like to be, so having Van Kikorian come speak to the community was really important to me.”

Stein says that for him, being Armenian is about being a part of a family. “It was great to hear all of Van Kikorian’s insights. It makes me happy knowing that there are people close by who are available and willing to share the facts, memories, and stories of the Armenian people,” he said.

On a personal level, Kikorian shared that his grandmother had watched her family be massacred, then was enslaved by Ottoman soldiers. She fled to Lebanon, then to Cuba, and finally to Massachusetts. He also shared how his father’s family was aided and escaped being murdered by a Turkish family, demonstrating that there are good and bad people in every society.  When he was in high school, Krikorian said that, like all high school students, he was deciding what to do with his future. He wanted to be an oceanographer, but because of the deep injustice his family suffered, he became an international lawyer and has always campaigned for genocide victims and human rights causes.

He also talked about the final stages of genocide – denial. Initially, Turkish courts brought charges against the perpetrators who killed Armenians. They were charged and found guilty of the elimination of the Armenian population. Subsequently, the Republic of Turkey launched a denial campaign claiming that it was in fact Armenians who attacked Turks. He described ongoing efforts by Turkey to influence international public opinion, including the United States government. Many Presidents pledged to recognize the events as Genocide while running for President. However, they failed to do so upon assuming office. Biden is the first President since Ronald Reagan to use the word, Genocide.

Turkey threatened to close Incirlik Air Force Base if the US reaffirmed the use of the “G-word,” genocide. Incirlik is a critical staging ground for fighting ISIS in Syria and Iraq. Turkey is a NATO member, which played an important role during the Cold War. Jupiter missiles were stationed in Turkey on its border with the Soviet Union. Today, NATO members question Turkey’s reliability as a member of the Alliance. Turkey recently spent $2.5 billion to purchase S-400 Surface-to-Air Missiles from Russia, in violation of NATO protocols. But at the same time, Turkish leader Erdogan has proven to be undemocratic and a major violator of human rights.

Krikorian emphasized the importance of truth-telling in order to prevent future crimes, such as the Cambodian and Darfur Genocides. He also discussed his participation in the Turkish Armenian Reconciliation Commission in which Armenians and Turks agreed to a neutral legal process, that ended up qualifying what happened to the Armenians as genocide under the UN Treaty. By recognizing the Genocide, Korian hopes that democracy in Turkey can be strengthened and that progress will prevail. He said he believes that silence is complicity when it comes to crimes against humanity.

Roughly 1.4 million members of the Armenian diaspora live in the United States, where they are constructive members of society and successful in business. Armenians also live in France, Lebanon and Iran. Armenia was the first Christain country, which existed for millennia.

A second Armenian Genocide is currently underway in Artsakh, an Armenian enclave in Azerbaijan. Turkish drones were deployed, targeting Armenians and ancient monasteries. The Masters School is in touch with The Jangiryan High School, in Artsakh, to explore faculty and student cooperation in this war-torn region. Dialogue is essential for mutual understanding and a zoom bridge is planned for next week. Student Maya Phillips ‘23 is working to organize this meeting. Phillips says, “Students at Masters want to take action that can help the victims perverse their education institutions and culture in Artsakh.” Masters is considering an international speakers series for the 2021-2022 academic year.