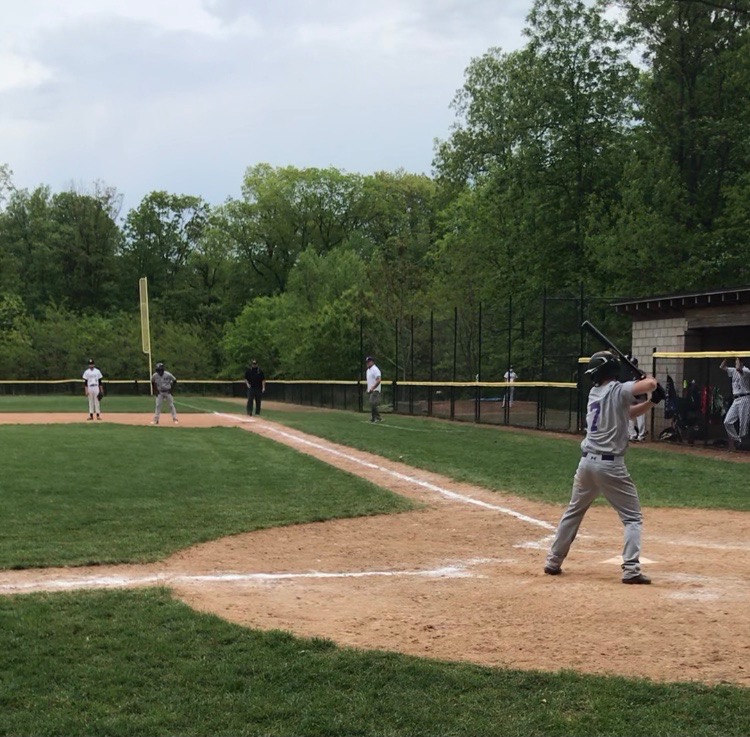 Senior center fielder Nick Albani stands in the batters box during the sixth inning of Masters' season opener at Hackley. The Panthers dropped the contest to the Hornets, by a score of 11-6 in seven innings.

By the end of the second inning, the writing was on the wall for the Masters varsity baseball team: Sunday afternoon’s season opener at the Hackley Hornets was going to be one to forget for the Panthers.

Masters’ bats were silenced early by Hackley ace Alex Kalapoutis, and the Hornets jumped out to a 7-0 lead. An inning later, Hackley had extended its advantage to 11-0, and Kalapoutis had yet to allow a hit.

And though the Hornets still handily defeated the Panthers when all was said and done, a solid relief outing from freshman Henry Hübner, along with timely hits from seniors Nick Albani and Justin Small, junior Ethan Rosenberg and Hübner turned a blowout into a competitive 11-6 final after seven innings at Hackley’s DelMoro Field.

Regardless of the score, the team was glad to be back in action for the first time since 2019, after the COVID-19 pandemic put team activities on hold for over a year.

Head Coach Dale Mueller said, “It’s a chance to do something else––it’s not practice, it’s not schoolwork. It’s getting together in a social activity, having some fun and building some team camaraderie.”

A positive energy coursed through the Panther dugout during the game, with cheers erupting after nearly every positive play from the first pitch to the final out.

After the seven innings of varsity play, both teams substituted in J.V. players, who continued on to scrimmage the final two innings.

Assistant Coach Brian Cheney was impressed with Masters’ resiliency in the contest.

“The bats picked up, and guys stayed a little more focused, and got a little more aggressive at the plate and on the bases. And that was our game plan going in––we specifically talked about how we’d bounce back from the start, and I think we’ve done that,” Cheney said.

Senior shortstop Justin Small said he’s looking forward to the Panther’s second and final game of the season, which will take place on Clarke Field against Rye Country Day on May 22.