NFTs cause friction in crypto community 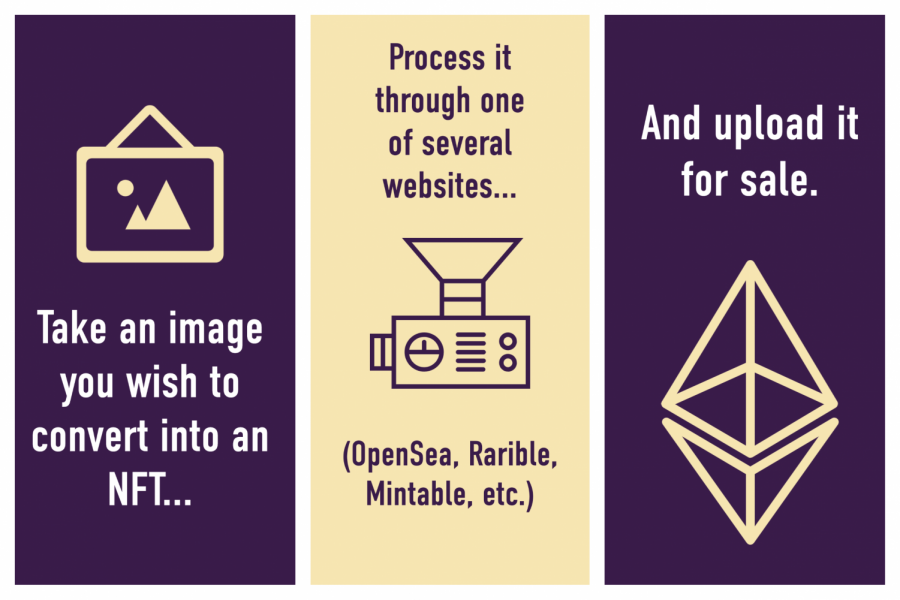 A description of the NFT manufacturing process. As the market for NFTs has risen to prominence, NFTs have become an increasingly polarizing item on the market.

Even those who aren’t active members of the cryptocurrency or art communities have likely heard the term “NFTs”, or non-fungible tokens.

NFTs are an identifying code given to a digital work of any kind. Through the use of the Ethereum blockchain, a virtual ledger of trades and transactions, these codes are made nearly impossible to replicate. Essentially, they are digital stamps that can be given to a piece to verify its legitimacy. The most common use for this, so far, has been art collection: they excel at preventing fraudulent purchases of art, and several storefronts have already been set up online where people can buy and sell artwork.

Since late February of this year, when a series of high–profile sales grabbed the attention of the public, NFTs have been a topic of constant debate.

Common threads within the debate vary widely, including concerns about environmental harm brought on by ‘mining’, a process of creating new tokens that requires tremendous amounts of computing power. Chris Precht, an Austrian artist who previously attempted to sell NFTs of his own, found that “creating the 300 items of digital art that he had planned to sell… would have burned through the same amount of electricity that an average European would otherwise use in two decades.”

There are also questions regarding its economic viability and whether the market truly is a bubble. Some want NFTs integrated into everyday life, while others would find them better suited to a metaphorical scrap pile.

Everyone seems to have an opinion on them. But what is it about NFTs that makes them so singularly frustrating?

The reason for this divide might vary, but it might have something to do with the importance art holds to so many people, especially in the digital age.

Art has always been something deeply emotional, both for artists and consumers. The process has become even more expansive as creators gradually lean more towards online spaces to host and share their work. Entire communities have sprung up around the art these people have created, and with that comes an attachment to the medium as a whole. That manifests itself as either a desire for innovation or a protectiveness towards the craft.

Those who are most allured with the concept of NFTs claim that they are the future of art, and that they empower artists to have full control over their work by removing the need for middlemen who can ensure the safe, non-pirated distribution of it.

Detractors of the Ethereum blockchain often cite the energy consumption associated with cryptocurrency at large, but also note the several cases where artists have had their art stolen and turned into NFTs against their will as an abuse of the system’s power.

NFTs have divided the art community, and hopefully, both sides will find their interests aligning in the near future- with or without new technology.