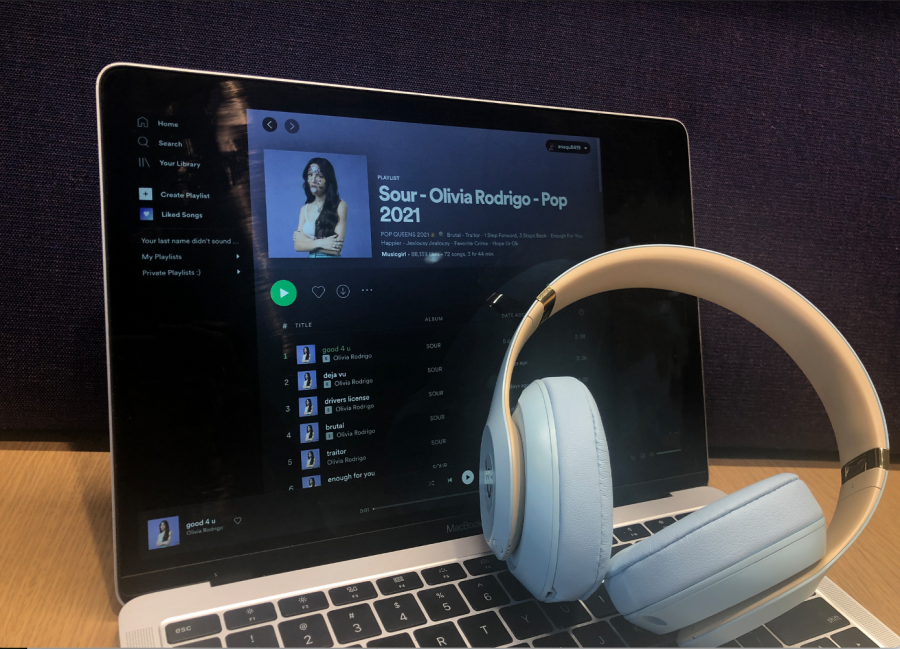 By now, few people can say they have not heard of the name Olivia Rodrigo. The 18 year old actress, singer and songwriter has taken over social media platforms like TikTok with her record-breaking singles such as “drivers license”, “déjà vu” and “good 4 u”, even sparking new viral trends and obtaining millions of streams. Rodrigo has been steadily gaining popularity, starting out as the star of the Disney Channel show Bizaardvark, starring in the original Disney+ show High School Musical: The Musical: The Series, writing and releasing her own music apart from the show and even performing on SNL and The Brit Awards. And on May 21, Rodrigo released her debut album “SOUR”, containing her three singles and eight more songs.

Rodrigo’s album is an emotional collection of her experience with heartbreak, fighting internal feelings of jealousy, coming of age and a sudden rise to fame. With the central theme of failed romance, the songs are deeply personal and specific to Rodrigo’s break up with HSM: TM:TS co-star Joshua Bassett, giving her fans an intimate look at her healing process and the ability to watch her grow as a person. Yet, the music remains relatable to millions. The album is a blend of classic pop and punk, almost like a switch in persona as Rodrigo shows herself moving through the stages of grief. She takes her fans on her journey of self love, as she mentions in the lyrics of “enough for you”: “I don’t want your sympathy, I just want myself back.” The style is almost like a combination of Taylor Swift’s song structure, Billie Eilish’s edge and Avril Lavigne’s teenage pop-punk style, but with her own spin on the music.

I, along with many others, waited until midnight on the release date of the album to listen to the songs “SOUR” had to offer, and I was not disappointed. Song after song, I was impressed with the heartfelt lyrics, catchy melodies and the song’s ability to be played over and over without getting old.

The only thing I was hoping to get more of was Rodrigo’s punk side. “brutal” and “good 4 u” were so out of the box and undoubtedly my favorite songs Rodrigo produced. While all her songs incorporate beautiful lyrics, I felt as though some of her other songs were a little too similar to each other melodically, but these two songs were so distinct that it made up for it. Additionally, while the song “hope ur ok” had a beautiful message, it felt like it did not belong in this album. This particular song reminisced on past friendships that drifted apart, and while it was beautiful, it felt out of place. If released as a solo, the song would be much more effective.

I have heard lots of people say with complete confidence that SOUR would be the album of the summer. While the album as a whole has a more relaxed feel to it, I believe it will certainly reach record breaking numbers and be on everyone’s radio. All 11 songs have made it to my spotify playlists and will be top songs for the summer. It is definitely worth giving a listen.