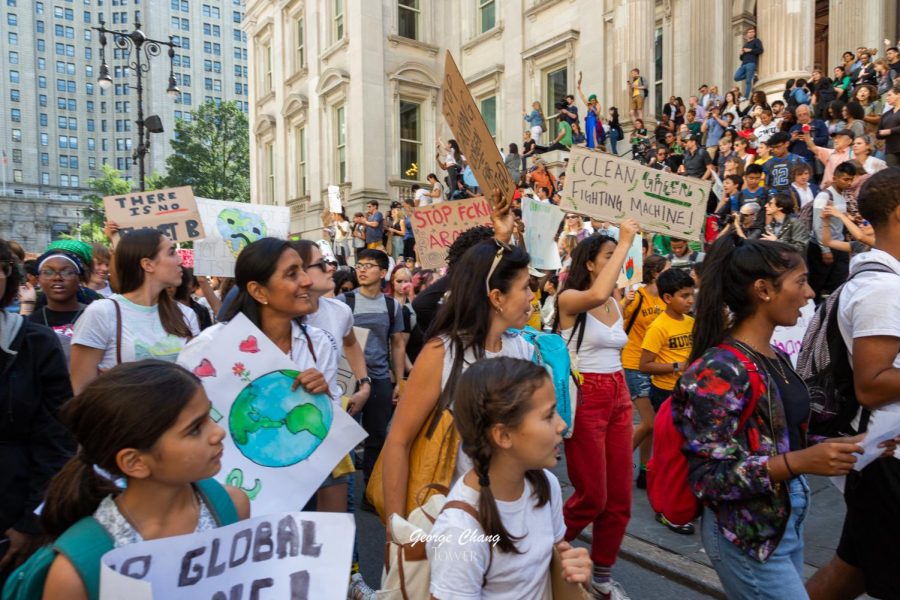 People protesting during the September 2019 climate strikes in New York City. The protested had an estimated turnout of over 250,000. Mas- ters students were allowed an excused absence to go to the march.

There is no such thing as a rain angel. Nor a rainball fight, nor sledding in the rain, nor, until recently, rain days.

The effects of the ongoing climate crisis are running their course at and around Masters. Increased precipitation, especially, has heavily impacted the local area in recent months.

Several harsh rain storms have passed through Westchester County this fall, causing severe flooding, building damage and even school closures. Hurricane Ida made landfall on Sept. 1. Five people died in Westchester because of the storm and buildings at Masters were flooded. Another severe rainstorm touched down in Southern New York on Oct. 26, with flash flooding and high winds. The Masters School sent out an announcement on Oct. 25 that school would be closed the next day in anticipation of the inclement conditions.

Masters parent (of Leo and Genevieve ’24 and ’27) and research professor at Columbia University’s Lamont-Doherty Earth Observatory, Radley Horton specializes in climate extremes and impacts, currently co-chairs Columbia’s Adaption Initiative and was a leading author for the Third National Climate Assessment.

“The last couple years have been so extreme, in so many places, that it is becoming easier to see the signature of climate change even in single events,” Horton said. “New York City set a roughly 50 year record for hourly rainfall in late August of 2021. Less than two weeks later, that new record was shattered by over 50 percent.”

According to a report on the impacts of climate change in New York from the National Climate Assessment in 2014, not only is increased precipitation expected to continue, with more frequent storm events and heavier downpours, but the annual average temperature statewide has risen about 2.4°F since 1970; by 2100, sea levels will be 18 to 75 inches higher along New York’s coastlines.

Further south, these problems are only exacerbated by rapidly rising sea levels and extreme flooding from rain storms. The New York Times reported in 2017 that the Southeast and Midwest are faring far worse than states in Northeast and West. A state like Florida, for example, “could face major losses, as deadly heat waves flare up in the summer and rising sea levels eat away at valuable coastal properties.”

Sophomore Violet Paull believes that there needs to be broader systemic change when it comes to the climate crisis in order to solve problems on a local level. She is deeply involved in organizations fighting climate change on and off campus. Paull serves as the Director of External Outreach for EFFECT, the sustainability initiative at Masters, and works closely with national climate organizations such as Extinction Rebellion and Fridays for Future.

She said she has felt “disappointed, but not surprised” seeing the toll climate change is taking on the local area and beyond.

“We have known this was going to happen for a long time. It’s not like out of nowhere, it’s begun raining all the time,” Paull said. “We’ve seen six to seven rainstorms here within the last few months, and it’s only going to get worse. It’s only going to get more frequent and more extreme,” she said.

Climate crises are adversely affecting different communities within Westchester County, too. An independent private school in Dobbs Ferry has the resources and management to repair the losses felt during natural disasters. The majority of the bottom floor of the Fonseca Center and the entirety of Strayer Gym are currently undergoing extensive renovations to repair the damage from flooding during Hurricane Ida. In Peekskill, however, residents may not be at such an advantage when it comes to climate issues as a whole. In a publication from the Harvard Law & Policy Review, NY-17 congressman Mondaire Jones argued that, “Peekskill’s poor air quality endangers its residents. The city houses several major sources of air pollution, including a Wheelabrator plant that incinerates Westchester County’s garbage and several major thoroughfares that bring carbon-spewing cars and trucks directly through Peekskill’s population centers. This air pollution has been deadly for Peekskill residents, who suffer from asthma at alarmingly high rates—their rate of asthma-related emergency department visits is more than four times as high as nearby Somers.”

Paull said, “I’ve seen climate anxiety growing recently, especially among my friends. I mean, one side of the country is in a drought and the other is flooded.”

According to a 2017 report, 100 large corporations are responsible for 71% of global emissions. So, the question remains: what can individuals do to help?

Horton said, “Never underestimate how powerful you can be. Speak up about the things that are important to you, and people will listen. If you told me just 5 years ago that students would be picking their colleges, first jobs, and purchases based on those organizations’ commitment to fighting climate change, I would have been skeptical.  But that is exactly what is happening, and fast. So speak up.”