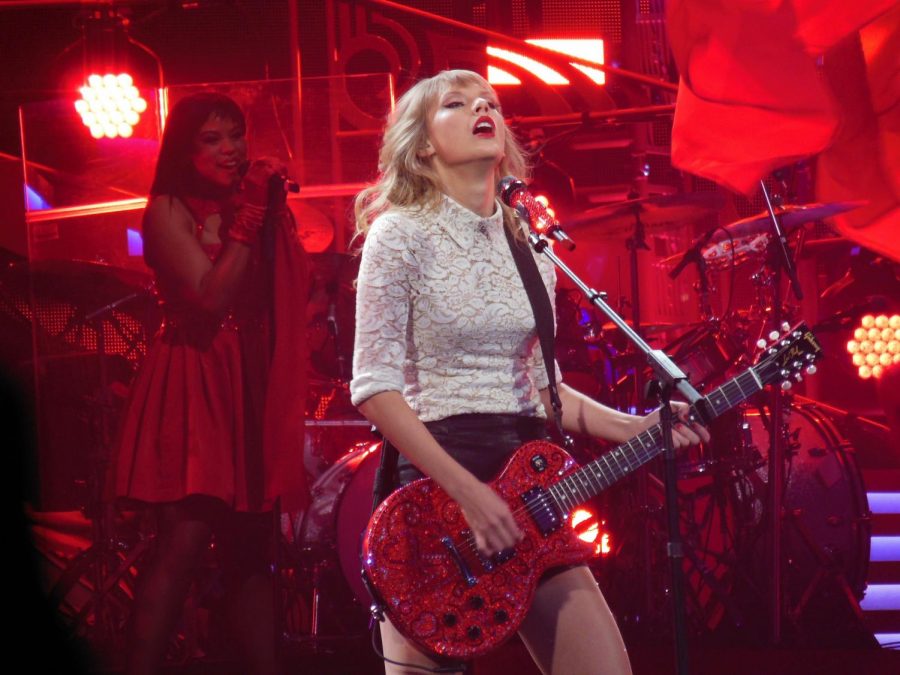 Love her or hate her, Taylor Swift has been one of the most prominent figures in the music industry since 2006. Be it country, pop, or indie folk, Swift has released award-winning albums that never fail to make me feel emotions I never even knew existed before. With over 46 million monthly listeners on Spotify, it doesn’t look like she’s going anywhere anytime soon either.

It’s safe to say that Swift’s lasting impression on the world is due, at least in part, to her relatability. Senior Anna Drattell, who has been a fan of Swift (or a “Swiftie”, as we’re called) since around 2010, said that “We’re two completely different ages and grew up in two completely different decades, but I just feel like she understands what I’m going through even though we’ve never met ever.”

As a dedicated Swiftie, I can confirm that this is a sentiment many of us share. There’s something quite comforting about listening to her breakup songs, whether I’m listening to “All Too Well” and crying or screaming along to “This Is Why We Can’t Have Nice Things.”

Of course, Swift’s time in the industry has not been without scandal. When Swift was 15, she signed on to Big Machine Label Group, which led to the group acquiring a massive net worth of $300 million. Once her 13-year deal with BMLG expired in November of 2018, she signed on with Universal Music Group and Republic Records. Big Machine was subsequently bought by Ithaca Holdings, a company owned by Scooter Braun. Despite her wishes, Swift could not buy back the master recordings of her first six albums, meaning that every time someone streams her old music, the money goes not to her but to Big Machine. It also means she has no control over her work. In November of 2019, Swift accused Braun and Borchetta of blocking her from performing her older songs at the 2019 AMAs and from using them in her 2020 documentary Miss Americana. Frankly, I wouldn’t put it past them to do that; clearly the only value they connect to Swift’s work is the value of the money it makes them and they have no respect for the blood, sweat, and (sometimes literal) tears she puts into it.

It seemed that the only way for Swift to regain control of her older works was to sign back to Big Machine and earn them back, one for each new album she made. I find it disgusting that they did that to her, especially when she was only 15 and didn’t know any better. Art should belong to the artist who created it, not men who had no part in the creative process yet reap the benefits anyway.

Swift’s contract with Big Machine stated that she could re-record her music starting November of 2020, so she seized this opportunity to reclaim what was rightfully hers. The first of these re-recordings, Fearless (Taylor’s Version), was released this past April and included six previously unreleased songs “from the vault.” The way she revealed these “vault” tracks was actually really interesting; she posted a video on her social media accounts with scrambled words and a vault in the background, and her followers then decoded these to figure out the names of the unreleased songs. This crypticness is, of course, one of Swift’s trademarks.

When it comes to making and releasing music, “swift” is the exact word one might use to describe her speed. Red (Taylor’s Version), the next of her re-recordings, is set to release on Nov. 12. The Red album includes some of Swift’s more popular songs such as “22” and “We Are Never Ever Getting Back Together,” as well as fan favorites like “All Too Well.” Red carries a lot of meaning for me because I listened to it a lot during hard times in my life and it really helped me. The intimateness and relatability of her music makes it feel almost as if the songs are addressed directly to me, and that’s a quality that keeps me coming back to Swift’s music.

Another re-recording came out of the blue: “Wildest Dreams (Taylor’s Version).” The song is a hit single from her 2013 album 1989, and the re-release of this song is a big deal to Swift and Swifties alike, because she used a recording of her heartbeat in the track, so now she owns her heartbeat again.

Senior Teddy Diamond spoke of the significance of Swift’s re-recordings. “She’s taking back a part of her that is powerful, that is a form of self expression, and she’s taking that back and she’s making it hers. She will own the recordings. It’ll be hers, and it’ll permanently belong to her,” he said.

I could not agree more; as a writer myself, I know about the sanctity of writing as a form of expression, and I can’t imagine what it must be like to not own one’s own words. I have nothing but respect for Swift as a writer, and I applaud her for taking matters into her own hands and claiming her music to be her own again.