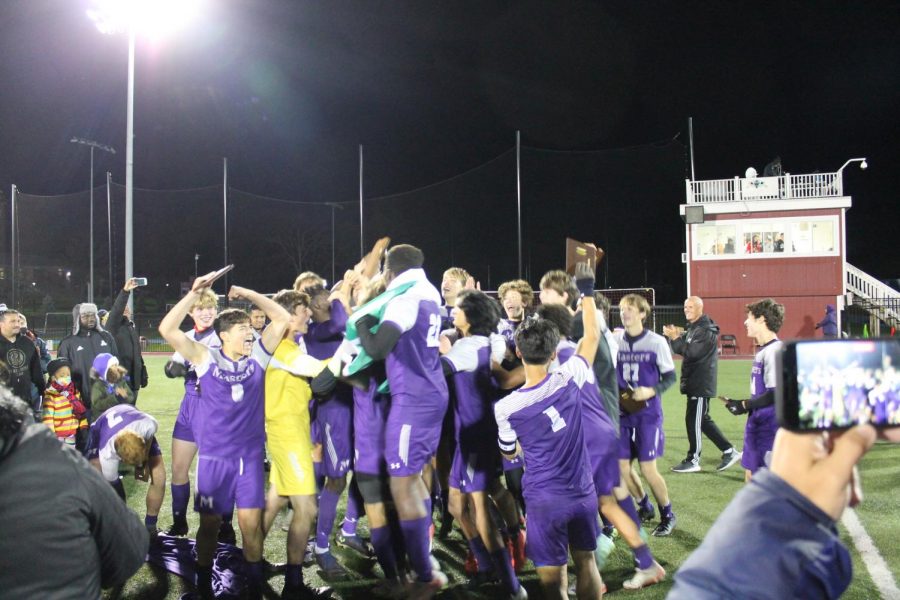 The boys varsity soccer team celebrates after their 2-1 win against Hackley in the school's first-ever NYSAIS championship. Despite the fact that the team did not play any games last year, they achieved their first major win in five years with this victory.

As the scoreboard ticked down to zero, hundreds of students on the sidelines rose to their feet, buzzing with excitement in preparation to rush the field in celebration. The last 80 minutes in the freezing air had been some of the most grueling, but so had the last five years been for the boys varsity soccer team. And so as the final ball was kicked and a mob of fans swarmed the pitch, the team’s first-ever New York State Association of Independent Schools (NYSAIS) championship marked more than an unprecedented moment in program history: it demonstrated a climactic triumph by a team and a school that had lost so much.

The Panthers’ victory came over rival Hackley School by a score of 2-1 on Sunday, Nov. 7. While the match was played at Manhattanville College as a neutral site, the game had an electric atmosphere from kick-off, as hundreds of supporters showed up to cheer on the team in the season’s culminating competition. Though the team as a whole was motivated from the start to win something, senior captain Kyle Benson spoke about part of his motivation in an interview before the NYSAIS playoffs.

“I promised the seniors my freshman year, when we got kicked out of the FAA [tournament] in the semi-finals against Hopkins in double overtime, I promised them we [would] win something, and that’s exactly what I plan to do,” Benson said. With the win, Benson honored his promise, and although the victory displayed the team’s playoff success, the highs of their season date back to the beginning.

Despite a tough loss in their season opener to Hopkins School, the team rattled off eight wins in their next nine games before finishing the regular season with a 10-1-3 record. Their accomplishments earned them the #1 seed in the NYSAIS tournament, in which they defeated United Nations International School (UNIS) and Riverdale Country School by the scores of 2-0 in the quarter-finals and semi-finals, respectively, before beating sixth-seeded Hackley in the championship game. The team also participated in the recently-rejoined FAA tournament as the #2 seed as well. In an interview before the NYSAIS playoffs, Athletic Director Logan Condon spoke about the remarkable success of a team that did not have the chance to play a single game last fall.

“I’m incredibly proud of our team and very excited about all that they’ve accomplished so far. They’ve done an excellent job for competing for the first time in two years”

Condon said. “Seeing the quality of play that they’re putting out there has been incredibly impressive, in my eyes.”

The source of their success comes from several places. Condon spoke to the role that the coaches have played in helping the team achieve as much as they can.

“I think it’s always good to have continuity within the coaching staff and the two of them [Coaches Ray Franklin and Neil Jaggernauth] have been around this group of student-athletes for three years, so they’ve been able to build off of previous seasons and have been able to really honing in on the little pieces that they need to work on.” he said. “And I think they’ve really brought to the group this sense of almost renewal; you have an opportunity that you didn’t have last year, so let’s enjoy it, let’s work hard and get the most out of it.”

In a sport that demands a certain type of community culture and dedication, coaches are integral in setting the tone for a team. Assistant Coach Neil Jaggernauth spoke about what kind of impact he has imprinted onto the team this year in regards to the atmosphere.

While a lot of a team’s culture is established through coaching influence, much of it also comes from the players themselves. As a captain, Benson also talked about what being a key leader means to him.

“Everyone can be their own captain; it’s not just about who has that role. I think it’s about who can be their own leader and then also set an example for their peers and those that are younger,” he said. “So everyday, whether it’s on or off the pitch in school, I strive to be the best role model I can be for the younger players and the rising seniors, especially, to kind of teach them and show them and guide them through this idea of leadership so they can then carry on the legacy that we’ve established this year and in years past.”

As for player performance itself, Benson spoke about how the team coming together over the course of the season to develop a really strong community has led to their success.

“I think that we have a lot more passion and a lot more effort [that we are putting] into not only games, but also practices,” Benson said. “And whether we’re bonding on or off the field, we’ve grown a lot closer and it’s kind of [become] a collective strive to perform at the highest level and achieve the most success we can.”

Individually, Benson mentioned that players in all grades have contributed to their success, whether it be the numerous juniors like David Ferrando and Henry Eisenbeis holding down the defense, Adul Samon and David Medina controlling the midfield, and Demi Oni serving as the spark plug for the attack, or seniors Daniel Medina, Nate Dyott, and Amechi Aduba helping to lead the way. In the NYSAIS championship game, it was senior Daniel Heller who made the difference, scoring both of the team’s goals in their win.

However, despite the team’s NYSAIS achievements, their season would ultimately come to an end with a heartbreaking loss to Greenwich Country Day School on Thursday, Nov. 11. The Panthers found themselves down 2-0 about ten minutes into the match, but slowly pulled it back to 2-2 with goals from Aduba and Benson. The match stayed level through overtime before Greenwich pulled out the win on penalty kicks (5-4).

While the NYSAIS victory proved to be a special moment for the soccer program, it also meant something for the school community, which was able to come together and cheer for a team at this level for the first time in a couple of years. Senior Aidan Lothian, a co-president of the Dobbs Athletic Association, spoke about fan involvement from a leadership perspective.

“I’m super grateful that we’ve had an opportunity to have this kind of team, while I take on the role as DAA president. I think it’s made my job really fun and exciting, just trying to get as many people excited about the game,” Lothian said. “So seeing the whole community come together, whether they’re athletes on the team, whether they’re in the stands, it’s been really cool just to see everybody coming together like that,” he later added.

Sports have a way of providing moments that are bigger than the game itself. For senior and organized soccer rookie Ethan Yankey, this fact is all too true. Yankey, who hails from Dominica, a small island in the Caribbean, is spending his first full year on campus after learning remotely during his junior year. He reflected what it meant for him to have teammates that served as more than just co-athletes surrounding him.

“For me, the most meaningful thing about being a part of the varsity team was the bond that we had. When I first arrived and I met the team, it was like everyone was welcoming,” he said. “But then as time passed by, it grew from classmates to actually like a brotherhood. And that kind of reminded me of the friendships that I had back home, because when I left home, I thought ‘well, it’s going to be very different trying to fit in and actually trying to make friends here’ because it’s different cultures and expectations and stuff like that. But they were so welcoming and I felt like I grew a lot [from] them; it wasn’t just about soccer anymore, it was about like a family.”

While Yankey may not have been the leading goal-scorer or top college recruit, being on the team was special for him. In particular, he laughed reminiscing on a couple memorable moments that he had with his teammates this season.

“I couldn’t kick the ball to save my life, I couldn’t squat to save my life, but Daniel Heller taught me how to kick the ball and I started kicking it really well and it was amazing,” Yankey said. “I remember before our [NYSAIS] finals we had a penalty shootout, and I kicked the ball in such a way – it was so powerful, it was just amazing. Like all of them started shouting at me because it was just class. I was so happy, man. I felt loved in that moment.”