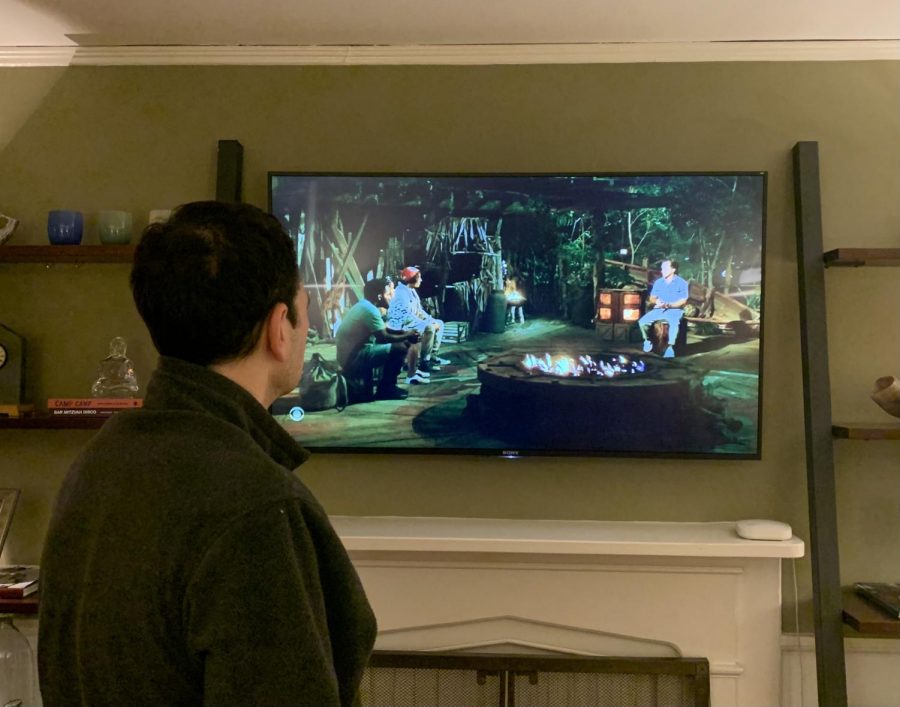 Mitchell watches the Survivor season finale with his dad. This season, the first Canadian contestant won and received the title of "Sole Survivor."

I have grown up watching Survivor for my entire life. Of the 41 seasons that have aired over the last 21 years, I have watched 36 of them, only failing to watch the remaining five for lack of the correct streaming service. Every Wednesday night from 7-8 p.m. EST, I am whisked away to Fiji or Micronesia or Samoa as I gather with my family to watch the castaways marooned on an island, forced to strategize, compete and eventually vote each other off the island.

This season, the cast was joined by Evvie Jagoda, an Edgemont, N.Y.  native, who grew up just a few minutes from my house. The minute I saw a cast member from my hometown, I immediately felt represented. I placed 20 dollars on Jagoda to win the game through a pool at my dad’s office and every week sat in front of the TV cheering on the Edgmontian. I was seeing someone just like me play the game I had grown up watching.

I have watched the reality show evolve over the course of its run on TV, enthralled by the new advantages, challenges and twists to each season, shaking up the game. However, this season, after a decision by CBS to require all of their reality shows (Survivor, Big Brother and Love Island) to be cast with  at least 50% people of color, the game has changed simply in the demographics of its contestants.

Season 13 of Survivor saw an equally racially-diverse cast, but the show split up the contestants into racially segregated “tribes,” forcing them to compete against one another–now a highly criticized season. This season, however, shows the truly most diverse cast in every respect.

After watching the season premiere (the first episode in over a year,) I was taken aback by how much of the one hour airtime was taken up by progressive discussions. The premiere opened with a discussion of whether they should change one of the famous survivor catchphrases “come on in, guys” to “come on in” and followed with a similar set of interrupting political correctness checks. I sat frustrated at the changes that were cutting into the strategizing and challenges I love. I didn’t get it.

After the episode, I scrolled through the comments of @CBSSurvivor on instagram, reading the reviews of this premiere:

“Can we just stick to the game? Not everything needs to be about race.”

“WTF happened to Survivor? It’s all bullsh*t politics and race. The show shouldn’t be pushing this crap in my face when I just want to watch the show. This is a joke.”

“Stop making everything about race and sexuality.”

While I didn’t feel any of these emotions nearly as aggressively as the commenters, I was ashamed to say I agreed in a certain capacity. I just wanted to watch the Survivor I knew and loved. However, I then thought about seeing Evvie Jagoda, the Edgemont native on TV. I thought about how cool it felt to have someone from my hometown representing me in front of millions of viewers. I thought about how much it meant to me to have that representation.

I understood at that moment why representation in the media of all types of people is so important. I have loved Survivor for all of its 41 seasons, in part, due to the fact that all of the people have looked like me. 29 of the 40 winners of the million dollar prize were white and 18 of those were white men.

Now, the cast has representation for every audience member watching the show. Every kid can watch someone who looks like them compete and strategize and win a million dollars. Every kid’s identity can be validated by someone who looks just like them on TV. They show that you don’t need to look a certain way to be a winner.

I am sure that the reviews of this season will be mixed. Some will look like the comments on the CBS posts, furiously ranting about how their favorite TV show is shoving diversity in their face. However, for the first time, many others are finally able to root for someone who looks like them. It is integral that we drown out the negativity. We must express our understanding of the importance of these initiatives in comments and reviews of all media. We need to make sure that representation is ensured for the next 40 seasons to come.