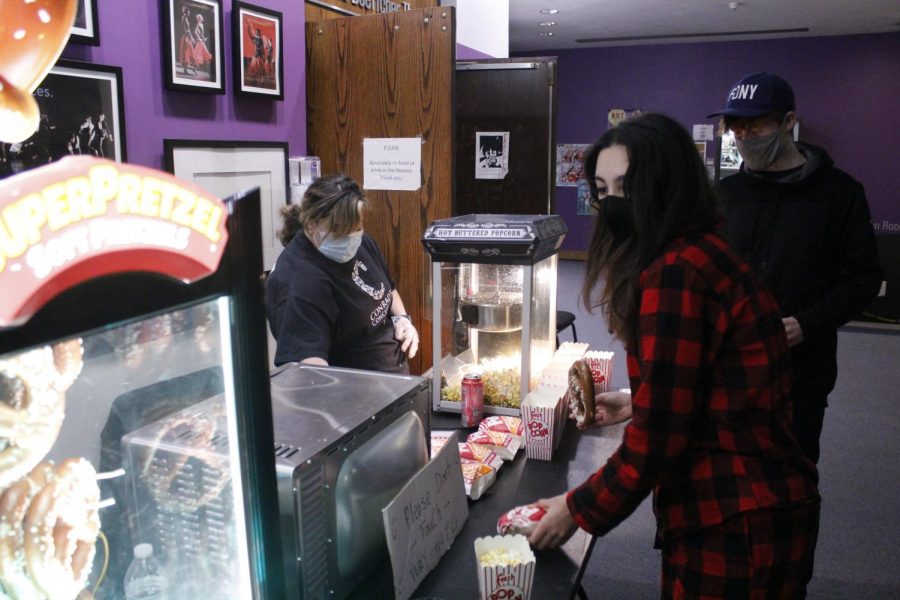 Senior Daniela Batista (left) and Rowan Walter (right) peruse the snack selection before movie night starts. Jeff Carnevale, dean of students, organized the logistics for the pretzel and popcorn machines, which were brought in from an outside vendor. Shelly Kaye, Class of 2022 dean, bought soda and candy for the movie night as well.

While numerous traditions are always celebrated in the Masters community, a new tradition that doesn’t involve tug-of-war or singing “Now I Walk in Beauty,” but instead popcorn and pretzels, has arisen: movie nights.

After a year of mayhem for student gatherings since the Covid-19 pandemic shut down the school, movie nights have quickly gained popularity in many different grades. On Nov. 19, the Class of 2023 held a movie night of their own in the Sharon Room at which around 40 students attended. Junior class presidents Tyler Hack and Aimee Ayala helped organize the grade-wide event. In an interview with Tower, Ayala talked about her goals for events like these after a period when school activity opportunities were not as abundant.

“I think it was like a really big deal to both Tyler and I to make sure that we could create an environment where everyone felt welcomed,” Ayala said. “And sometimes things can be awkward so something like a movie night is a really easy way to get people together and [let them] enjoy themselves.”

The event was originally planned to take place last year, but because so many students were not on campus due to the pandemic, Ayala said that they decided to hold off until this year more people could get involved.

In a similar manner, the Class of 2022 also held a movie night on Friday, Dec. 10, for which students gathered in the Claudia Boettcher Theatre to watch the academy award-winning film Knives Out. Senior class dean Shelly Kaye helped organize the event, which had popcorn, pretzels, and other treats for all that attended. A few days before the movie night, senior class dean Shelly Kaye spoke to the importance of movie night after a time of chaos.

“We were so separated or we’re just seeing each other through screens, [so] there’s a lot of rebuilding that needs to be done, you know, rebuilding of community,” Kaye said. “And so I think this is, you know, just one good way that we can do that.”

The event was organized by senior Daniela Batista, who came up with the idea during a free period before Thanksgiving break. After consulting with a few friends on whether they thought it was a good idea, Batista went to Kaye to ask about organizing the event, who gave her the okay to start organizing it. She also talked with Jeff Carnevale, dean of students, who helped organize the popcorn and pretzel machines that were brought in from an outside vendor. Like the Class of 2023’s movie night, many students came out to enjoy the film. In an interview with Tower, Batista spoke about how movie nights serve as more a fun activity, but also a way for people to gather and connect.

“I think community-wise, it’s definitely beneficial to have an environment where we can all come together that’s non-academic related,” Batista said. “I think that it’s [movie night] a place for us to kind of just be comfortable and be with each other.”

While the community continues to rebound from the pandemic, movie nights mark one of the first types of class gatherings in almost two years. Going forward, Batista mentioned that she wants to hopefully hold more movie nights in the future, considering the success of the first one. Additionally, she spoke to the possibility of holding a karaoke night for the Class of 2022. And whether it will be watching or singing, one thing is certain: there will be plenty more events (and snacks) to come.