Order on the court 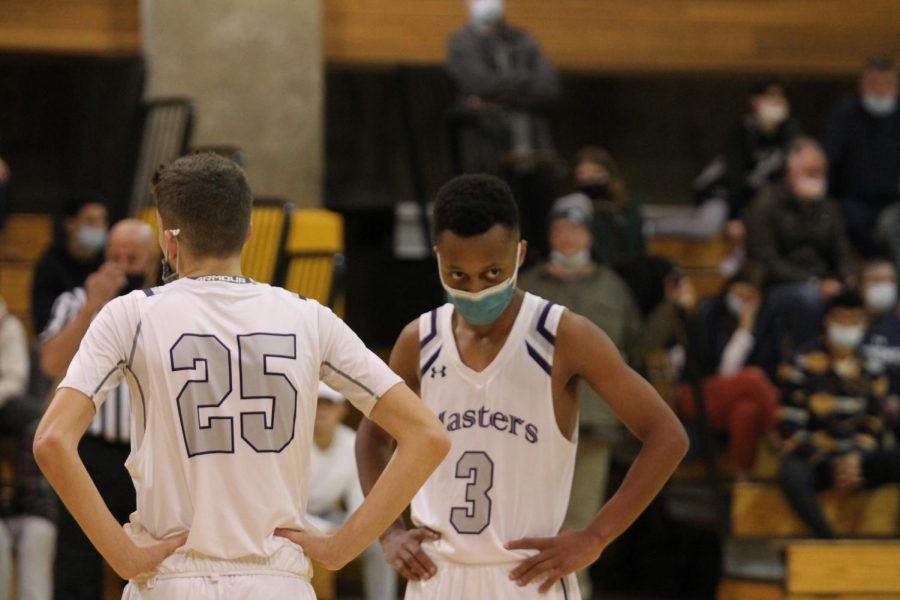 Nicholas Chin, playing for varsity team during away game at Brunswick Dec.11

As the winter sports season has begun, the boys basketball team has been working hard throughout their week-long tryout process. This year, there were an overwhelming 64 Upper School boys who tried out for boys basketball. During the week of tryouts, the athletes were explained the full commitment of a varsity team. They were also tested on certain technique drills and scrimmages to get a sense of their skill level and endurance in the sport.

Due to renovations in the Strayer Gym, both girls and boys basketball must share the Fonseca Center gym. During the week of tryouts, boys basketball had to alternate between indoor practice and outdoor practice on the tennis courts. The boys varsity basketball team additionally holds practice every Saturday to maximize the amount of time they have to prepare for games.

Keydran Clark, a coach for both junior varsity one and varsity basketball has worked at The Masters School for three years. Clark, as well as Coach Neil Jaggernauth and Coach Andre Pope had to adjust their tryouts to accommodate the cold weather and practice on the tennis courts.

Clark said, “It was tough because in tryouts we had 64 guys, and to have 64 kids on the tennis court, where there was one real coordinator, made it hard to put things together and to get the guys a full workout. But with the help of Coach Jay, Coach Andre, and myself we were able to put together some drills to help us evaluate them to see them in different aspects of what’s required to be a varsity player.”

One of the students that tried out this basketball season is junior Charlie Cooper, who was selected to be on the varsity basketball team. He said, “The biggest challenge was playing on the tennis courts, there’s a much higher injury risk and the weather can be freezing.”

During the selection process for varsity this year, Clark chose to form a more developmental team and to build a foundation that will create a better team in the future.

“I looked at guys that can be impactful right away, that can bring something to the team. I also wanted to get some young guys who didn’t have as much experience so I could mold them into the varsity players that I would like them to be in two years. That way they can get all the experience and learn to go through the hardships of a team so by the time they’re juniors and seniors they know what to expect from them on the court,” Clark said.

While not everyone is able to make the varsity team, there is both junior varsity one and junior varsity two for the athletes. Even though there are three basketball teams this year, the coaches were still permitted to make cuts during tryout weeks. The reasoning behind being cut could range from low skill level to not enough commitment to the sport.

“My thing today would be to understand what it takes to be a varsity player, that it’s not just being on the team. There’s lots of practice, even over the break and on the weekend. When everyone is about to go on break we have practice Saturday, games Monday and Tuesday, even leading up to Christmas. So when you’re trying to be a varsity player you have to take into account all of those things,” Clark said.

Christopher Gatty, a junior on the varsity basketball team, spoke to the high commitment level that Clark outlined.

He said, “Coach explained, you know, that it is a full commitment and you have to really be willing to apply yourself fully to the team and really weed out who is ready for that commitment.”

The transition back to winter sports after almost two years of not competing has allowed the team’s ambition and competitive spirit to grow stronger.

“Being away from the game brought out the hunger in [the team] to want to get back and compete and play against their friends. Having a year off because of Covid kind of sucked but at the same time [the team] were able to do a lot of zoom workouts and towards the end of the year get back on the court.” Clark said.

While COVID-19 took away a year of competing for boys basketball, they are able to use this year to build the foundation for a strong and successful team.