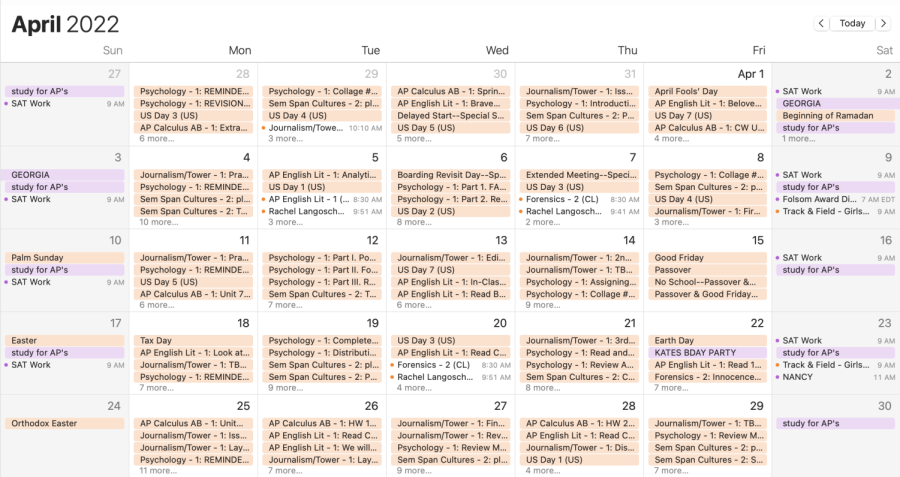 At the Masters school, students have one two-week long spring break instead of two one-week breaks equally spaced apart. In this article, Wolfson argues that this adds unnecessary stress and anxiety to students lives.

It’s February. You are sitting in a classroom, head drooping and shoulders slumped. You will your eyes to stay open but they do not obey, daring you to fall asleep on the Harkness table. Staring out the window, you think back to your glorious winter break that took place one month before. The break that gave you sleep and a much-needed vacation from tests and projects. You wish more than anything that you could have another break, one that was not still six weeks away.
At Masters, students are required to endure ten weeks between winter and spring break, followed by another ten until the end of the school year. These breaks are each two weeks long and run from approximately Dec. 20 – Jan. 4 and from March 12 to March 27. Returning to school after the holidays, Masters students spend the long two and a half months without a break in sight. Students work tirelessly to keep a healthy sleep schedule while not falling behind in work and maintaining a good social and at home life.
Teachers also suffer from only having these two breaks, as seen in a 2011 Meta-analysis study of Vacation Effects on Health and Well-being published by the Journal of Occupational Health. The study found that after vacation, “increased work engagement and decreased burnout only lasted for a few weeks, fading completely after one month.”
Because there is such a long time in between these breaks, students and faculty find themselves getting bogged down by work, unable to breathe and searching desperately for even one day off. This pattern continues from the end of March all the way until mid June. However, these months also include final exams and projects, AP Exams, and SAT and ACT tests for juniors, adding to students’ anxiety and stress levels. While these two week long breaks are designed to give students ample amounts of time for relaxation, the lack of breaks in between actually increases students’ stress levels which therefore decreases their productivity while doing work. Although Masters, as well as many other schools, have followed this two consecutive weeks off for spring break system, there is a better option: a two week winter break coupled with two one-week spring breaks.
Many schools throughout the country follow this system, giving their students a winter break from the 23 of December to the 2nd of January, followed by a February break from the 19th to the 27th, and a Spring break from April 9th to the 17th. By spreading out these breaks evenly, students are able to have only four or five weeks between breaks and the end of the year instead of ten long restless weeks. This not only gives students something to look forward to but also pushes them to work harder in the time that they do have.
For students that celebrate Easter, this April break allows them to spend the holiday and the weeks preceding it with their families. Additionally, allowing students a week break in April gives them time off before the month of final exams and projects which is much needed come Spring.
Although this two one-week breaks system appears to be a good solution, many institutions, especially those with students that board shy away from it due to students’ availability to travel home. For students that live in China or Thailand, it would be much more complicated to fly home for three breaks instead of just two, especially if said breaks were only a week long. However, if Masters decided to institute this new system, they could give boarders the option of whether or not to go home for every break. The Masters campus could remain open to these boarding students so that they could stay at school during one of the breaks. Further, many holidays that are heavily celebrated by international students coincide with the breaks that the two one-week system would set in place. For example, Lunar New Year, a holiday celebrated by ​​a billion people in China and millions around the world begins February 12 in Asia. Should students be given a week off in February, international students could travel home to spend this holiday with their families instead of having to celebrate over the phone from a dorm room. Additionally, the Songkran Thailand Water Festival – the largest celebration throughout the whole country -, which marks the beginning of the Thai New Year, takes place between April 13 and 15 every year, which would fall in the middle of the proposed spring break.
Although the two-week break system appears better in that it gives students more time off at once and it allows international students to travel home for a longer period of time, it is important to realize that switching to the one-week system will provide students with breaks during appropriate and much needed times of the year and will allow more families to spend important holidays together, making it far superior and a better overall choice.