Waze: a map to impair our memory 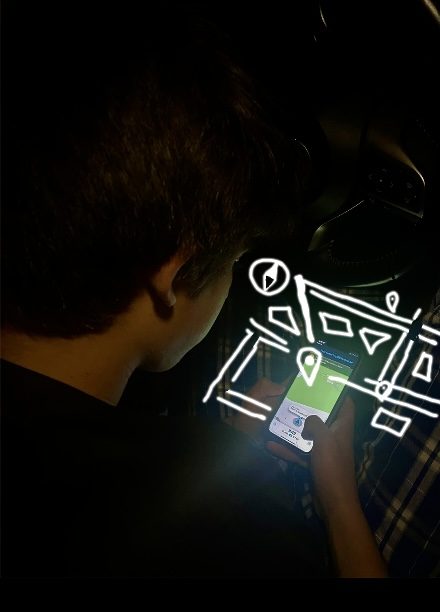 Teenager being consumed by the details of Waze before starting the car.

As I stepped into my car, I opened a text from my dad: “We’re all going to meet at that Italian restaurant north of Ardsley Rd., please meet us there by 6:30.”

Before buckling my seatbelt, starting the car, or turning on the radio, I found myself on Waze, subconsciously typing in the address of the restaurant and pressed Go Now.

About two minutes into driving, I realized something: I pretty much knew exactly where I was going.

As humans, watching that animated car depicted on a green road in front of our eyes provides us with a sense of reassurance and comfort, even when we are “pretty confident”. It becomes a dependency that we don’t want to detach from – one that is gradually impairing our own cognitive ability.

If you could have an app that will present a concise step by step route, while also notifying you about upcoming traffic, red light cameras, police cars or any potential barriers, why wouldn’t you use it? You probably would. And so would a majority of the driving population.

Before any navigation app existed, drivers would look at a physical map to get to a destination and learn to memorize routes and locations. Spatial navigation, something that was once accomplished entirely by the human brain, is now completely lost and replaced by the sound of Siri telling us when to turn next.

In the brain, the hippocampus, also known as “the map reader of the brain”, is what allows us to understand where we are at a given moment and gives us the ability to further navigate. The more gray matter located in the hippocampus translates to higher cognitive skills, as it controls speech, emotions, attention, decision-making and memory. Engaging the hippocampus and increasing the gray matter has been linked to the prevention of memory-related illnesses like Alzheimer’s Disease, Post Traumatic Stress Disorder (PTSD), and Dementia.

In Scientific American’s, “How GPS Weakens Memory–and What We Can Do about It”, neuroscientists Mar Gonzalez-Franco, Gregory Clemenson and Amos Miller examine the impact navigation apps have on our brain health and abilities.

They said, “GPS navigation apps treat us as passive passengers rather than active explorers, removing our agency to make decisions.”

Because we are constantly just waiting for the next shortcut on the screen, our own attention and connection to the physical world and environment around us is weakened. We are so focused on following the next turn, that we don’t appreciate the nature that surrounds us.

And, when we do get “lost”, we panic–we unlock our phone and open a navigation app. But, getting lost is good! When we find ourselves lost, our hippocampus is what will allow us to understand where we are;when we don’t allow our brains to naturally do that, we are training it to lose that function. A function necessary for survival.

If we  have an app that will save us before we have even recognized it, who will be there to teach us how to save ourselves when there is no robot in front of us?

What happens when the battery runs out? Or, when further generations don’t know direction beyond what is being automated in front of them? Who will save them? No one.

We are being consumed into a world and we must find the map back. It’s up to us to restore that function before it’s too late.

Stop glancing at the screen. Look at the world in front of you. Replace Siri’s voice with the sounds around us.

Discover your own routes, learn new shortcuts. Most importantly: get lost. And, learn to find your way back.