Close the book on middle schoolers in the library 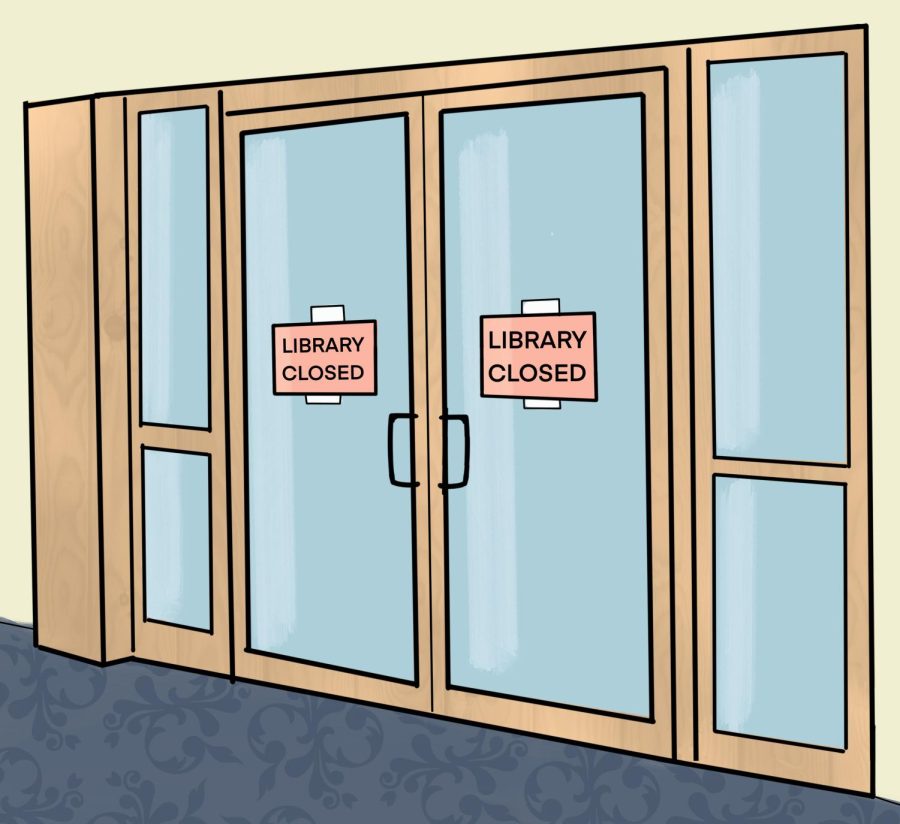 Everyday from 2:00-2:30 the Pittsburgh Library closes between third and fourth period. During this time, Middle School students are able to sign up and come in to take advantage of the newly renovated space. They can do homework, check out books, or socialize with their peers.

I am sure almost all Upper School students have heard the renowned cry made by the librarians as they make their rounds, urging students to leave and make room for the next batch. Students repack their bags, exit the glass doors and stand watching in the hallway as the middle school enters and the librarians put up the sign, “The Library will be closed for all upper school students from 2 to 2:30 PM.”

Many linger in the hallway, peering through the doors as the middle schoolers check out new books and use the one space provided to the Upper School students for studying. Others will search for a new location to work in that hasn’t been taken over by Freshman and isn’t crowded and filled with noise like the Fonseca Center or the Dining Hall.

Though some may not be bothered by this, many are, including myself. I, personally, use this time to finish up any leftover work, homework, or tests for the next upcoming period, and having that time taken away is a huge inconvenience. I understand that the middle schoolers have a right to be in the Library and have reasons for doing so, I am only asking for a new time to be proposed for when they go in.

It may not seem like a big deal for faculty and staff and they may feel as if including the younger students is a better way for the entire Masters Community to come together and bond while we use the new space, but many of you have your own offices to do your work. This is the space where we do ours.

A great deal of upperclassmen have few frees due to scheduling, overloading courses and AP classes, but in the few minutes provided for us a day as a break, Upper Schoolers get to study, sleep, and relax in this space. Until, only recently, when the Middle School started coming into the Upper School to use the Library on November 1st, 2021. Mr. Newcomb made an announcement during Morning Meeting about this predicament, but I brushed it off until I was forced to leave and I realized how much of my time was going to be taken away. Though the Pittsburgh Library is for the whole Masters Community, and I understand that the Middle School has little time to enjoy the newly renovated room, I still think we could find a better time for them to come in or even let the Middle School and Upper School students use it at the same time. If you want us to be a community, let us get to know each other in the space we love so much.

I recently sent out a Google Form to the Upper School, asking them whether they found the time taken away from them disruptive and if the middle schoolers should find a new time to come in. I have received 106 responses, each expressing how/if this situation affects them.

Jillian McCoy, the new Head Librarian, and Jennifer Rathkopf, the Middle School Humanities Coordinator, collaborated to find a way for the middle schoolers to visit the Library. They spent time looking through the middle school’s schedule and found that the “Academic Choice Time,” which falls from 2-2:30 P.M., coincided with the Upper School’s break. “It seemed like a natural time to let middle schoolers come and use the space,” said McCoy.

Like myself, many upperclassmen thought that the middle schoolers and upper schoolers should use the Library at the same time. An anonymous upper school student wrote in the google form, “It is frustrating that we aren’t even allowed in with them during that time. I feel that we deserve to be working in there while they use the library. I think we can coexist.”

McCoy and Rathkopf, however, found that some middle schoolers are uncomfortable coming to the Library when upperclassmen are there. “I understand why the upper schoolers feel that the space could be shared, but it can be a little bit intimidating for them [middle schoolers] and they need to be supervised a bit more actively than the upper school students. Using this break allows middle schoolers to use those pods, and gives them a time that feels special and dedicated for their use,” McCoy said.

When I was in the Middle School, we were not technically allowed in the Library and we too were somewhat intimidated by the upperclassmen, however, we never needed to go there. There was no reason for us to. In the 30 minute break provided to us we spent the time eating snacks, playing outside and did our work in classrooms or the chairs outside the Head of Middle Schools office. Another anonymous upper school student wrote, “I was in the Middle School, we never used the library, and we never wanted to. There are plenty of social spaces in the middle School. The library would not be a social space for middle schoolers but a place to find resources if they need.”

Despite the fact that McCoy understands that the middle school coming in is disruptive because it changes the upperclassmen’s school day, she also thinks it’s for good reason. “Once 4th period starts there are about 5-10 minutes where there is a delay for them [upper school students] getting into the library but I think the 5-10 minutes is worth the access that it provides to those middle schoolers who don’t get to use the space for the rest of the day.”

Many upperclassmen who filled out my google form understand that the middle schoolers should be allowed to use the library but still think it’s too much of an inconvenience. “It’s not that I don’t feel like the Middle Schoolers should be welcomed into the library, it is a space for everyone, but I just think it is extremely inconvenient when I happen to be working on an assignment in the library and then get shooed out with nowhere else to really go to productively finish my work,” an anonymous upper schooler said.

Though this predicament may take a while to be solved, if it ever does, I would still like to see some form of active conversation around the topic, ensuring that we find a way for both the upper and middle school students to be happy and use the space provided when given the time.