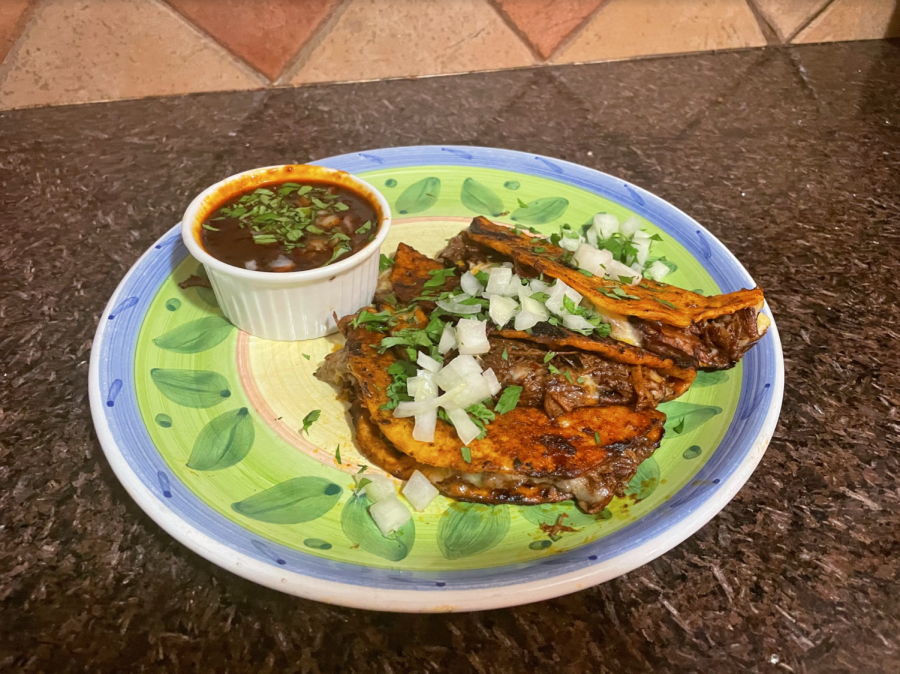 Birrias tacos have taken the internet by storm in recent months

Diving into the World of Birria Tacos

Birria tacos is a dish that took the internet by storm and is a staple in Mexico. Originating in the Mexican state of Michoacan, this dish is traditionally only served on celebratory occasions due to the fact that it takes upwards of three hours to prepare. The word “birria” is used to describe the quality of meat used in these tacos.

Many people could not afford expensive cuts of meat and could only get the cheap cuts, therefore they created this dish to create a flavorful, tender meat dish that doesn’t require breaking the bank. Though originally made with goat meat, it is more commonly made with beef with cuts such as chuck (shoulder) and oxtail (tail). Making birria tacos is very complicated and requires quite advanced culinary skills but, if done correctly, is one of the best dishes you will ever have.

Chef Luis Zavala, owner of “La Fondita”, a Mexican restaurant located in Bronx N.Y., said, “I think as with any dish there does need to be a certain level of background knowledge in order to properly prepare it. You can follow a recipe but if you don’t know how to handle yourself in the kitchen it won’t come out as good.”

Zavala also commented on his history with the dish saying, “I’ve always made the dish at home. My mother taught me how to cook it at a young age. Now at our new restaurant, it has become a staple in the first couple of weeks that we have been open.”

When this dish was brought to the internet, lots of the complexities of preparing the dish were lost in the viral recipes coming out. Part of the reason may have been to make the dish more accessible to the viewer, and so making them more inclined to make the dish but I believe the main reason is because of TikTok’s format.

The app TikTok is one of the most popular social media platforms on the planet with over 4.8 billion users and 1 billion active users. TikTok is a platform where creators can make 15 second to 1-minute videos about whatever they want using different backgrounds, sounds, and a variety of filters.

When birria tacos became big in June of 2020, lots of creators took to TikTok in order to share their recipes. The only problem was that they had only one minute to do it. In 60 seconds, each chef had to describe and show all the detail and complex skills needed to make this dish, so some of the details had to be dropped. “TikTok Chefs” started making the recipe similarly in order to fit all the information into a single video.

I recently had family over at my house so I decided to test out the two different recipes and pinned them against each other and asked my guests to say which one was better. I had not been familiar with this dish prior to seeing it all over the internet but as soon as I saw it, I researched it immediately and was in love.

The beauty of this dish truly came to life during the cooking process. The smell of the roasted peppers, spices, and tomatoes on the stove as I cooked half a batch of both birria recipes overcame me.

The entire house smells like the dish I’m cooking for my family. I sear the steak until a good crust is formed and as I hold the fatty piece of Chuck Roast down to the screaming hot pan I feel the burning hot canola oil pop and hit my hand.

Though I can feel it, it doesn’t really hurt as I have done this countless times and know the importance of holding down this type of steak so it can get the perfect crust. After hours of waiting for the meat to slow cook to the perfect “fall off the bone” tenderness, it is time to prepare and assemble my tacos.

I open the pot and feel a waft of the hot, rich, flavorful steam from the dish hit me. I use a fork to feel if the meat is ready and it was. I fish out the steaks with a pair of kitchen tongs. The steak falls apart as soon as I attempt to pick it up so I have to switch to a handheld strainer instead.

After moving all pieces of steak to a separate bowl, I hear the cries of my family to hurry up with the food but I do not let their complaining pressure me into going any faster, as I know what it takes to bring this dish to perfection.

I grated the pieces of meat to fine, stringy shreds. I warm up my homemade flour tortillas, dip them in the beef stock and fry them on my griddle until extremely crisp. I add my authentic Oaxaca Cheese to the entirety of the tortilla and add shredded beef to half of it. I fold the tortilla, let the cheese melt and hold the taco together. I plate all the tacos with a side of the broth in one of my mom’s little white ramekins with chopped cilantro and onions on top. The two dishes were perfect and ready to serve.

I blindfolded the participants and had them try each dish, cleansing their pallets with a sip of water between each bite. Not surprisingly, the authentic version won with flying colors. Though the differences between the two recipes were minor, they made a major difference in flavor.