Courtesy of The Masters School

Goggles from Morris Hall, as well as latex gloves and disposable wipes, are prepared to be sent off to New York Presbyterian Hospital–Columbia Medical Center. The donation included 198 pairs of goggles, 48 boxes of gloves and five containers of cleaning wipes.

The Masters School has taken a proactive role in supporting front line healthcare workers to fight against the COVID-19 outbreak. The school sent 198 goggles, 48 boxes of gloves, five containers of cleaning wipes and 40 nasal swabs to two New York City hospitals on March 25 and March 31. 3D printed protective face shields manufactured in the school’s Innovation and Entrepreneurship Center were also distributed to other U.S. medical centers.

The goggles, gloves and cleaning wipes, which had been used as protective equipment in the Masters science department, were taken from Morris Hall, packed into boxes and dropped off by a van at New York Presbyterian Hospital in Manhattan.

The donation began with a request from Susan Chong, the wife of David Chong, who is Medical Director for all Critical Care Services at New York-Presbyterian Hospital/Columbia University Medical Center. Chong sent a message to her friend Dody Chang, an acupuncturist who practices in Irvington, NY late at night on March 25, asking to see if Chang could locate 200 pairs of protective goggles by 4:30 p.m. the next afternoon.

Chang had met Masters Head of School Laura Danforth a few years back, and decided to reach out by email in hopes that Masters would have the supplies that were needed.

Chang said,  “I expressed to her the urgent need for the goggles, and that we needed goggles that are used in science classrooms… So I reached out to Laura [Danforth] and she said, ‘Absolutely, we’ll get you everything we can find.’”

Given the strain the pandemic is having on the U.S. healthcare system, the types of personal protective equipment (PPE) typically used in high school science classrooms (goggles and latex gloves) have been sought out by hospitals.

“It was whatever we could find to give them as PPE. There were no face shields available, so we had to find goggles as protective eyewear, so that when things get splashed, or if people spray or cough, the aerosol particles were not getting in contact with the healthcare practitioner, so they needed protective barriers for their eyes.” Chang added.

According to upper school science teacher Nancy Gormley, the Science Department sent out all of its goggles for the donation, which the department wasn’t using because of Masters’ shift to remote learning. Then, on March 31, Chang reached back out to Danforth, having received new requests from SUNY Downstate Medical Center for Nasopharyngeal swabs, which were needed to test for COVID-19. Masters was able to locate 40 of the swabs in the school’s health center, and send them to the Brooklyn hospital.

According to Chang, the precedent Masters set by making the donation has set the bar high for other PPE donations from schools, which also have items that could be used for healthcare professionals.

“Masters was really the early adopter of this. They responded the quickest, and with their response we were able to look at this more district-wide,” Chang said.  She added, “It [the donation] was like a little miracle that happened… It gave me such a feeling of, ‘We’re going to be okay. If we do what we can to help each other, we will get through this. And people will respond, they’ll step up.’ It gave me this feeling that as a community we’re in this together.”

Masters was really the early adopter of this. They responded the quickest, and with their response we were able to look at this more district-wide”

The face shield production and donation was facilitated by Director of Innovation, Engineering and Computer Science, John Chiodo. Chiodo was able to use the industrial 3D printer in Masters’ Innovation and Entrepreneurship Center to produce medical face shields as PPE. Sophomore Dell Hallock and freshman Chris Nappo, who have 3D printers and the materials needed to produce parts of the protective face shields at home as well, also worked on the project with Chiodo, as well as Freshman Nate Borwick and parent Rob Feuer, who donated supplies to be used for the face shields.

According to Chiodo, 232 face shields have been sent out in the past week to Burke Rehabilitation Hospital in White Plains, St Joseph’s Medical Center in Yonkers, Andrus-on-Hudson Nursing Home and the Dobbs Ferry Ambulance Corps. An additional 75 were sent to the Michigan Medicine at the University of Michigan, where Chiodo’s brother is a clinical professor. The total of delivered face shields is slated to reach 400 by next week. 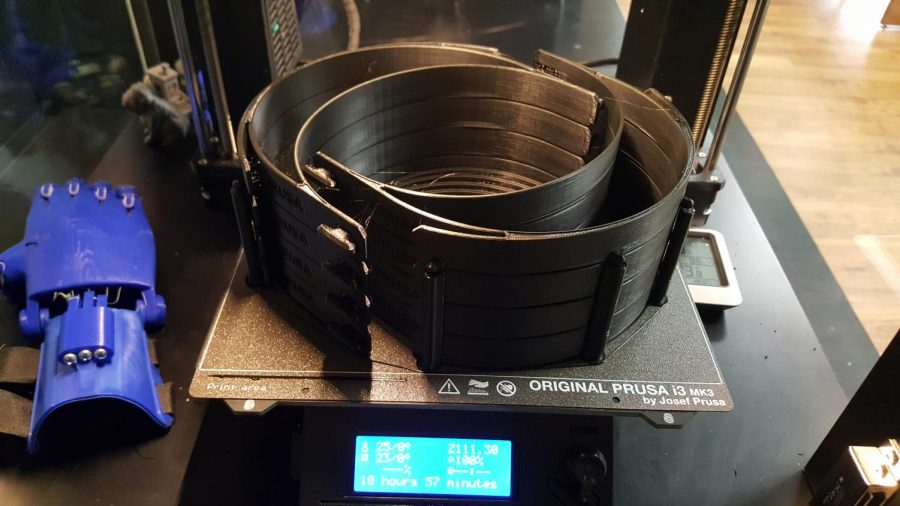