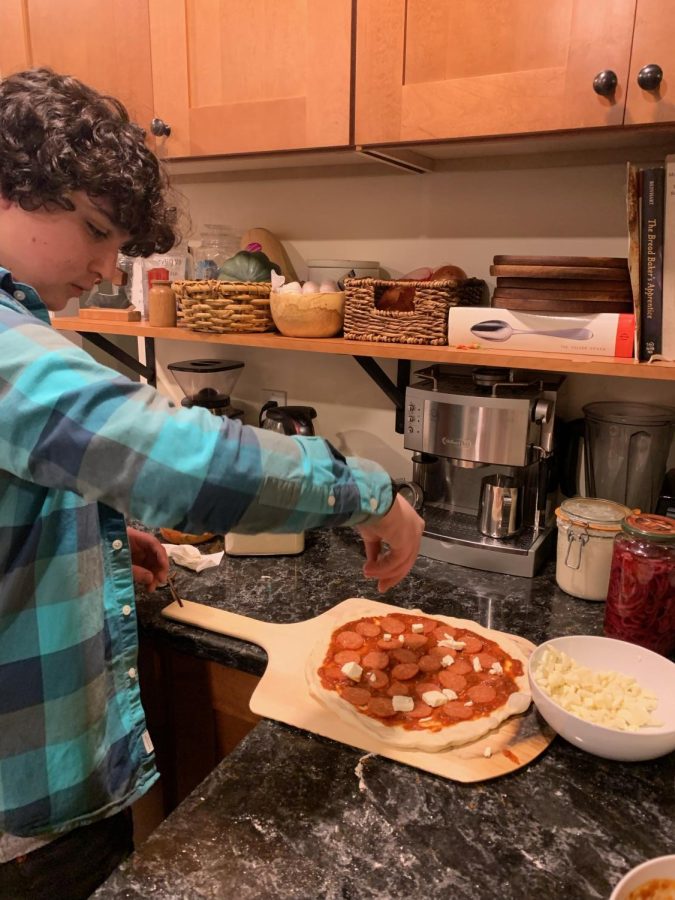 It seems that every year, pizza ranks as a top ten most popular food in the United States. In fact, a recent survey by The Harris Poll in 2021 showed that 21% of Americans favor Pizza over any other food — and for good reason. There are so many different types of pizzas and styles of cooking, that there’s a type for everyone. New York-style pizza, Chicago-style deep-dish pizza, New Haven: all over the country, cities have turned this classic meal into something truly special.

My family and I have always preferred Neapolitan-style pizza. The crispy, light dough and minimal, “fancier” toppings make this type of pizza especially delicious. The only issue? It’s incredibly difficult to make properly.

The dough itself is fairly simple to make – and tastes absolutely delicious. Of the many pizza dough recipes online, I’ve always preferred the recipe from Roberta’s Pizza (included at the bottom), adapted by The New York Times. It’s incredibly easy to make, taking only 20-odd minutes to prepare (plus time for the dough to rise) and using only five ingredients. Other toppings are easy enough to prepare too — store-bought cheeses and meats will suffice, and any homemade red sauce can be made in just half an hour if you want to take your pizza to the next level.

The real difficulty is actually cooking the pizza. Most standard ovens don’t go above 550° Fahrenheit — which, while high enough for most foods, is not hot enough to properly cook this style of pizza, rather, a proper Neapolitan-style pizza should be cooked at 932ºf. On top of that, the flavor that wood or coal ovens impart on the pizza dough is a major part of what sets Neapolitan-style pizza apart from other styles. But, these wood-fired ovens, while practical for a large restaurant, are generally humongous and incredibly expensive. So for a long time, I had resigned myself to the idea that our standard oven was the closest we would ever get to having true Neapolitan pizza at home.

In steps Ooni. Created in 2012 by husband-and-wife team Kristian Tapaninaho and Darina Garland, Ooni is a company that makes pizza ovens — for the average consumer. Once a small Kickstarter project, Ooni has grown to become a much larger company, employing 100 people at its headquarters in Edinburgh, Scotland, and selling products all over the world. It seemed too good to be true, like the perfect solution for our problem had walked right into our lives.

And it had! After seeing just one advertisement, I was convinced that this was the perfect product for us. While not the cheapest product on the market for sure, at only $299 for the base model (at the time of purchase), it was certainly cheaper than any alternatives on the market, and was rated very highly by some of my favorite chefs, such as Kenji Lopez (see his review here).

Ooni’s United States Brand Manager, Ed Choi, described the Ooni as a “fast, portable, cost-effective, kick-ass wood-fired oven,” quoting cofounder Kristian Tapaninaho’s description of their flagship product. Since the first oven created by Ooni back in 2012, the company has launched more advanced and larger products, now capable of cooking even more foods, such as vegetable dishes, calzones, and even steaks.

Overall, users tended to be very pleased with the product, and with the company behind it. The current base model, the Fyra 12, is rated 4.7 out of 5 stars, showing an overall trend in user satisfaction. The Ooni public forum boasts hundreds of positive reviews, recipes, and delicious-looking pictures of what people had made with their ovens.

Additionally, Ooni is a progressive company taking a loud stand for what they believe in. As members of the “1% For The Planet” organization, Choi told me, “For every oven we sell, we can guarantee between 25 and 80 trees are planted.”

That’s not where their activism stops however. Ooni’s website also contains a “Modern Slavery Statement,” wherein Ooni acknowledges the issues of modern slave labor, particularly within their supply chain, and goes on to call on lawmakers to pass legislation to “provide greater protection to workers against the threat of modern slavery.” Choi further elaborated, “[Modern slavery] is an issue we take very seriously. We made it clear on our website that this is something we need to stand up against.”

All these factors contributed to my decision to buy their oven. I surprised my dad with the Uuni 3 (rebranded today as the Ooni 3) for his birthday back in November of 2018, and he was ecstatic. Though truthfully, I was just as excited to use it as he was.

“When I saw what it was, I was excited to try it out. We looked up how to put it together and made dough basically right away,” he said. “I had heard about it once or twice before. I saw an article on Serious Eats about it, and I knew it was serious business.”

The setup process was quick and easy. As described before, the Uuni 3 was designed to be portable, so the parts were small and simple to attach, clipping into place easily. It comes with a pizza stone for the inside, which is very sturdy and easy to lock into place.

The process of actually cooking the pizzas is fairly simple. First, load the hopper in the back with wooden pellets. They should be 100% wood, because those are the purest and the most concentrated. These can be purchased from a variety of places — including from hardware stores, Amazon, Walmart, Target, or even Ooni themselves. The pellets are small – roughly the size of a pill capsule. But while they may feel tiny and insignificant, when hundreds if not thousands of these pellets burn together, it adds up quickly, reaching temperatures of roughly 932 degrees Fahrenheit.

Lighting the pellets is not as easy as it may seem. Indeed, while they are small, wooden pellets won’t just catch fire right away the way kindling would. Rather, much like lighting a larger fire, they need lots of exposure to heat in order to begin to burn. In the case of the Ooni, the easiest option is to use a blowtorch. The back tray is designed for a blowtorch, with holes on the side allowing for the pellets to easily be lit. While indeed the fastest way to light the pellets, most people don’t own a blowtorch. In that case, you can still easily get a fire going, using paper and a traditional lighter, though it will take a bit longer. The smell of the wooden pellets immediately wafts through the air outside, as the heat begins to build and other pellets ignite.

The design pulls the flame to the front of the oven, allowing a more even cook and letting the stone reach incredibly high temperatures in just 10 to 15 minutes. Built-in systems allow for optimal airflow, making the process simple for new users.

Admittedly, there was a bit of a learning curve. But by the end of our first day, there was a clear improvement in the quality of our pizzas, as we learned how to better time turns and use the pizza peel properly.

Visit the company’s website www.ooni.com to learn more about this product, or to buy one for yourself!